London: Healthy athletes should take their place in the COVID-19 vaccine queue behind people with more pressing needs despite events such as next year's Olympics looking set to be highly dependent on competitors arriving free from the virus, the head of world athletics Seb Coe said.

Most athletes in their 20s and 30s, across all sports, would be just about last in line in most countries when it comes to handing out the vaccine but the pressure to create a COVID-safe environment at sporting events has raised the question of whether they should be treated as a special case. 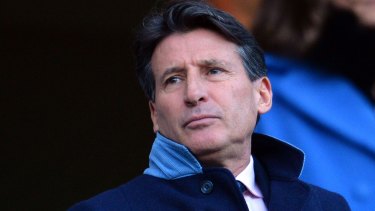 Coe trod a careful line when asked about the issue at a media conference on Friday. "We have to be sensitive here – there are many claims on that priority," he said.

"Most of us are dependent on our frontline workers and our emergency services and we also recognise that there are vulnerable people in the community and we want to make sure that we look after them as much as possible.

"I'm not sure that it is for sport to be pressing the case for fit young people. I would like, on the other hand, that when the vaccine does become available and that the athletes have the opportunity to make use of it that they do.

"I'm not mandating it and I don't think it's my job to tell people what they should or shouldn't do in that area – I think that has to be a very personal and individualistic view.

"I hope they do avail themselves of it, I certainly would if I had the opportunity in the lead up to a Games like that, but it's very much a personal decision."

Coe, who won double Olympic gold over 1500 metres and was the driving force behind Britain's hosting of the 2012 Games, was confident next year's Tokyo event, postponed from 2020, would go ahead, and said that if any country could respond to the challenge of a re-arranged Olympics it was Japan.

"I think the Games will go ahead. I was in Tokyo a week ago and spent 48 very intensive hours talking to the organising committee and the government," he said.

"There is a cast-iron determination to stage the Games, though there is a recognition that we are still in uncertain territory. Yes, the vaccine will help, but I guess for athletes in the village and warm up track etc, there are going to be some adaptations.

"What nobody is across at the moment – and I certainly hope it happens – is whether we are going to have a stadium populated by good, passionate fans. Those are some of the things that are up in the air, along with athlete management in the village

"We are all pretty resolute about those changes. I can't imagine what I would have been saying if someone had knocked on my door in March 2012 and said 'We're not going until 2013' – it's an enormous challenge.

"I think we should be very grateful, and I wake up grateful most days, that it's the Japanese who are dealing with this because this is a first class organising committee.

"They have the intellectual ability and certainly the resilience to see their way through this coming six months to deliver what I think will be a fantastic Games."