Rohan Browning was philosophical after a disappointing world championships two weeks ago when he didn’t get out of the heats and ran below his par.

Once the annoyance settled of running fifth in 10.22 seconds in his heat and not matching his superb efforts of the Tokyo Olympics when he ran 10.01s and made the semi-finals, he took the view of a student, which is unsurprising. He is still at uni. 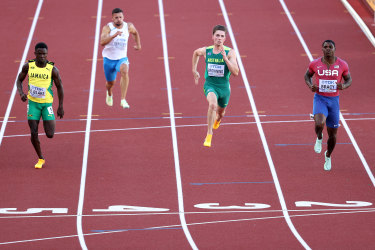 On the plus side, his starts, which had been costing him in races and which he had worked on with his coach Andrew Murphy, were good. He was the quickest out of the blocks in his heat. It was the next bit of the race that was the problem.

“I just haven’t figured out yet how to integrate that start into the rest of the race,” he said.

“I get to the 10-metre mark and I’m in the wrong position to accelerate through the rest of the field.

“I’ve taken a lot of losses this year on the circuit, and it’s been about approaching it with the mentality of a student where you’re trying to learn and adapt.”

After the events of Eugene, Australia’s fastest man was also able to content himself with the fact he had an immediate chance to pit himself against some of the best runners in the world again at championship level with the Commonwealth Games coming so quickly after Oregon.

“That definitely takes a bit of the sting out of it. I’ve just been struggling to get into that top form this year, and now I get another couple of weeks to try and find it,” he told AAP in Oregon.

The field in Birmingham isn’t quite the calibre of Oregon, but it is not far off. All up, 11 sprinters competing in Birmingham made the semi-finals of the world championships in Eugene.

Browning is confident he can still make the final, and be in medal contention.

“Whenever you cop a loss or a tough result, the key is not to take it to heart,” he said.

“You’re going to take a lot of losses in your career, whether that be at club meets or on the circuit, or at major championships. It’s happened before, and I’m sure there will be more in the future.

“It’s a matter of learning from them and picking out the positives and focusing on what you can improve on.”

Get all the latest news from the Birmingham Commonwealth Games here. We’ll be live blogging the action from 4pm-10am daily.