Barring injury, Dani Stevens should win another national discus title this week. It will be her 14th.

No Australian athlete has ever won 14 national titles in one event.

For Stevens, the world champion in 2009 and silver medallist in 2017, staying free of injury is never a given. 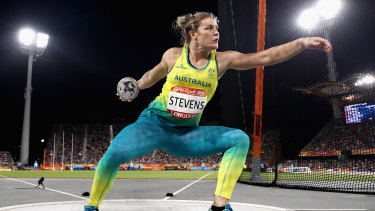 Dani Stevens on her way to winning gold at the Commonwealth Games in 2018.Credit:Getty Images

The 32-year-old missed the 2019 World Athletics Championships in Doha due to a back injury before throwing an Olympic qualifier of 65.93 metres later in the year.

Then, a year ago, she suffered nerve damage from a bulging disc in her neck after a gym accident. She needed surgery and wondered if she would ever throw again.

She has come back to competition with a series of throws that has put her back on the edge of Olympic qualification.

She threw 63.36m a month ago, just short of the Olympic standard, and then 62.22 metres a fortnight ago.

“It’s been really hard and really frustrating, but I’m out the other-side now,” Stevens told Athletics NSW after her first competition in 15 months.

“It feels like that time was a bad dream, but it was so worth taking the time to do it properly and recover with normal function back, then to comeback and throw just short of Olympic qualifying is pretty good when I think about it.” 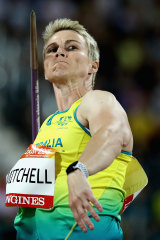 Kathryn Mitchell will go up against world champion Kelsey-Lee Barber at the nationals.Credit:Getty Images

At the national titles she will confront Kelsey-Lee Barber, the reigning javelin world champion who claimed the international title in Doha in 2019.

Tuesday marks 100 days to the start of the delayed Olympics and Australia’s athletes will be pressing in Sydney at the national championships and Olympic qualifiers to get themselves on the team for Tokyo.

Pole vaulter Nina Kennedy is already on that plane after the 23-year-old last month broke Alana Boyd’s national record when she cleared 4.82m and added 7cm to her personal best.

Athletics Australia on Saturday withdrew the Australian team from the 2021 World Athletics Relay Championships in Silesia, Poland in early May.

The decision, made because of the COVID-19 infection rate in Europe and the risk to athletes, means Australia will struggle to qualify relay teams for the Olympics.

Athletics Australia is therefore exploring options to host relay events in June in collaboration with Oceania Athletics to create opportunities for Australia’s relay teams to qualify for Tokyo.

“It is always disappointing to withdraw a team from a major event, however we believe the decision is in the best interest of the health and safety of our athletes, staff and coaches,” said Athletics Australia’s outgoing chief executive, Darren Gocher.