The previous record of 1.98m was set in 1989 by Vanessa Ward then equalled in 1994 by Alison Inverarity. 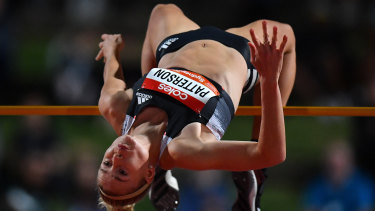 Eleanor Patterson clears the bar at the Sydney Track Classic earlier this month.Credit:AAP

In what could prove excellent, or cruelly unjust timing, Patterson has hit the new peak just months out from the Tokyo Olympics. The cruelty of unjust timing could be if the Olympics are forced to be cancelled due to the coronavirus.

Should the Olympics however go ahead Patterson's timing is impeccable and caps a stunning resurgence from the athlete who won gold at the Glasgow Commonwealth Games and went on to compete at the Rio Olympics.

She struggled to sustain her best form and suffered a form slump. Despondent with the drop off  Patterson was close to giving the sport away two years ago.

She stubbornly resisted Athletics Australia's attempts to move her onto funding programs and influence her coaching program as she remained living at home in Victoria's South Gippsland, where she had lived and trained when she enjoyed her successes in the sport.

Patterson moved to Sydney to be coached by Alex Stewart. She has responded to the move with a  return to her best in recent months and then Friday's stunning performance.

Patterson had twice jumped 1.96m in the Australian domestic season, being pushed by fellow Australian and Gold Coast Commonwealth Games bronze medallist Nicola McDermott who has jumped 1.96 and 1.94 in Australia.