The search to replace the biggest somebody in athletics found instead a nobody.

The question of this year’s Olympics was, for the first time in 13 years, not whether anyone could beat Usain Bolt, but who comes after Bolt? 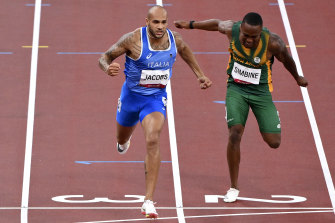 Lamont Jacobs gets in front to win gold in the men’s 100m in Tokyo. Credit:LaPresse

Few would have settled on the answer being a 26-year-old long jumper turned sprinter from Italy by way of El Paso, Texas, called Lamont Marcell Jacobs, who had never won a serious outdoor sprint competition in his life.

The only similarity between Bolt, the man who won the last three Olympic 100m gold medals and became the greatest athlete the world has ever seen, and the man who won the first Olympic sprint gold of the post-Bolt era is that he was a bolt from the blue. It’s a stretch.

The similarity between them now is contained to the fact they are both Olympic 100m gold medallists. Jacobs’ victory, in an empty stadium, could not have been less Usain Bolt.

In a race that had no real favourite, no-one figured on Jacobs.

And yet here we are. Jacobs ran 9.80 seconds to defeat the more fancied American Fred Kerley (9.84sec) – the fourth second-fastest man in the world over the last 12 months before the games- and Canada’s Andre de Grasse, who was third.

De Grasse, who ran 9.89s, won bronze in Rio too and was an athlete Bolt nominated as a runner who would in part fill his breach on retirement.

Born in El Paso to an American father and an Italian mother, Jacobs moved to Italy when he was one when the US military transferred his dad to South Korea. He identifies as Italian and speaks little English.

He has come from nowhere in this unusual five-year COVID-stretched Olympic cycle. At the 2019 world championships in Doha he didn’t make the final. He finished 19th. 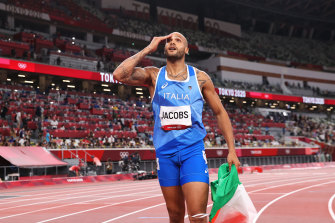 His only success came at the European Indoor Championships where he won gold for the 60m event. It’s run in a hall.

In the lead up to Tokyo, Jacobs’ best performance was second at a Diamond League meeting in Stockholm.

In his semi-final he finished third in 9.84s. He did not automatically qualify for the final but advanced as one of the two fastest times outside of the automatic selections who had finished top two in their semi.

As a form line, that does not scream next big thing.

He was not a runner to instil fear in the heart of competitors but maybe that was because he was from Italy. The Italians have a storied history and reputation for many things, sprinting is not one of them. Italy had never won a 100m sprint medal of any colour before.

Rohan Browing, too, was under-estimated.

In one sense, who cares? That is when sport is at its best, when the unexpected happens and the underdog wins. And that is where it should stay for now.

Doubt and cynicism is the inheritance of past sins in this sport. And yet if that familiar suspicion is to fairly fall on him why was his form not better than this in the lead-in? Why did he not do more in the last year? Why did he not win something more meaningful somewhere?

Jacobs can do no more than win.

He is the great surprise, his was the great upset. He might not prove to be the next Bolt, but he is the man who came next after Bolt.