Greg Norman played in four playoffs in major tournaments and lost all four to less distinguished Americans, including that notorious misfortune when Larry Mize chipped in to take the US Masters in 1987.

The Shark was bested in playoffs v Mize, by Fuzzy Zoeller at the US Open (1984) and in the “tragedy at Troon” when Mark Calcavecchia overcame both Norman and fellow Australian Wayne Grady to claim the 1989 British Open. Finally, he lost a sudden death playoff to Paul Azinger in the US PGA championship of 1993. 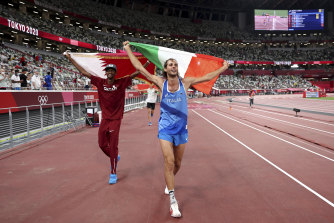 Mutaz Barshim and Gianmarco Tamberi tied for gold in the high jump.Credit:Getty Images

“The Shark,” thus, has the distinction of having lost all four golfing majors in playoffs, in addition to the various capitulations and near misses at his field of unfulfilled dreams, Augusta.

Had Norman been offered a joint engraving on the trophy at the 1989 British Open, or the PGA of 1993, it would be utterly reasonable for him to accept. After all, like a gold medal, the tie would still count in the record books.

Who wouldn’t accept the offer of shared victory, a win-win deal? Those were the extraordinary circumstances that took place in the Olympic high jump final, when Mutaz Essa Barshim of Qatar tied with Italy’s Gianmarco Tamberi and, after posing the question to the on-track official, the pair agreed, on the spot, to share the spoils rather than risking it in a jump-off.

Consider, too, the most recent US Open men’s singles final, won by Dominic Thiem in a sudden-death, fifth-set tiebreak against Alexander Zverev. Neither player had won a grand slam singles title. Thiem, too, was becoming a touch Norman-esque in that he’d lost in three major finals at Roland-Garros (twice) and the Australian Open.

So, if at 6-all in the tiebreak, Thiem and Zverev had been offered the opportunity to call it off and become joint owners of the US Open title, it is hard to see them refusing the slam in the hand.

The element of sportsmanship and emotion showed by the high jumpers in their golden moment was certainly memorable, uplifting even. But at its core it was utterly farcical.

How can a gold medal outcome be negotiated by the athletes, essentially by invoking an impromptu non-compete agreement?

These jumpers were pure in their motives, yes – it’s clear, as Seven athletics commentator and ex-Olympic long jumper David Culbert observed, that the pair didn’t know the rules for a tie.

But the notion that athletes have a choice at all – a gentlemen’s agreement to not compete further – is utterly at odds with the concept of elite sport. And we do not need to expand upon the possibilities for corruption, for betting angles, to enter the equation. 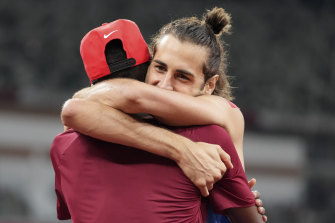 If there is to be a tie, it should not be up to the duelling competitors to call it.

At first, it wasn’t clear to viewers back home that the jumpers themselves had a say in sharing the gold. If you listen to the feed, Barshim asks the official, “can we have two gold?”

“It is possible,” the official replies – as though there’s a range of options (and remarkably, there were more than two).

The jumpers quickly conferred, deciding on duopoly, prompting the Italian’s most enthusiastic jump yet, into his rival’s arms.

Watching and calling this strange denouement, Culbert, who had actually read up on the arcane rules for countbacks and been briefed by Aussie guru Brian Rowe, noted that the rules were changed about five years ago. Under the current version – which he thinks will be changed after this controversy – there are a bunch of clauses governing what happens if jumpers are tied.

Essentially, it goes to a countback. First, they look at the last height both jumpers have cleared and then they tally up total misses – the order of who missed at, say, 2.33 metres or 2.35 metres doesn’t matter so long as the totals match.

Culbert subsequently asked Olympic pole vault champion Steve Hooker what he would have done had he tied in his pole vault final (London 2012). “He said you’d probably share it.”

Absurdly, the rules suggest the jumpers could even have the capacity to cease the jump-off after a few jumps and agree to share gold. The technical delegate has the power to stop a jump-off, but it also specifies that the jump-off can be “terminated … by decision of the athletes not to jump further prior to any or at any stage of the jump off.”

These rules incidentally, govern not only the Olympics and major international meets, but also national, state and lower levels – for which they are, it must be said, more appropriate than for the pinnacle of international sport.

Culbert didn’t mind that the jumpers shared the gold, observing that there at least had been a countback system and each winner was deserving. “The jump-off would have been an anti-climax.”

Great athletes, great sportsmen. But if this moment will endure in our memories, the flawed rules that allowed it surely won’t.