Liz Cambage is in danger of being dumped from the Australian Opals team for the Tokyo Olympics.

Australian Olympic Committee chef de mission Ian Chesterman told media on Friday he was aware that Basketball Australia was investigating an incident involving Cambage during a closed-door scrimmage with Nigeria earlier this week. 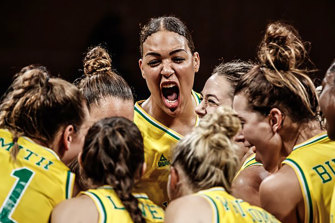 But Chesterman said he knew nothing more as it was still in BA’s hands.

Multiple reports have emerged including from ESPN that Cambage was allegedly involved in a physical and verbal altercation with Nigerian players and the Opals were considering her future with the team.

Tokyo would be the 29-year-old’s third Olympics, and she has previously suggested that this campaign would be her last as she looks to life after basketball.

If Cambage is cut from the team, it is unclear if they can get a reserve player cleared to join the team in time for the Olympics which start on July 23.

Cambage was ejected from a Commonwealth Games gold medal game in 2018 and from a pre-Olympic qualifier against Japan in 2019, for arguing with referees about how she was being defended.

If she is stood down, the Opals would play in the Games without their leading scorer and most potent inside force for the first time since the 2014 FIBA Women’s World Cup when Cambage ruptured her Achilles tendon on the eve of the tournament.

Cambage had shaped much of her past two years around leading the Opals back onto the medal dais in Tokyo after winning a bronze medal at her first Olympics in London in 2012. In Rio 2016, the team had a shock loss in the quarter-finals.

Cambage had rejoined the Opals in Las Vegas in recent days but also had commitments with the WNBA All-Star game which she appeared at but did not play in.

At the time, it appeared Cambage was saving herself for the Olympics by sitting out.

Cambage has been starring with WNBA club Las Vegas Aces, averaging 14.6 points and eight rebounds per game over 19 appearances with the Aces second in the WNBA.

Despite her heartache in the 2016 campaign, Cambage and coach Sandy Brondello formed a solid working relationship with Cambage leading scorer in the competition as the side finished second at the 2018 FIBA Women’s World Cup to the USA.

Cambage also starred in their FIBA Olympic qualifying tournament in France in early 2020, breaking down in tears after the team clinched its place in Tokyo.

The Opals and Boomers are scheduled to play their US counterparts in Las Vegas on Saturday but it is unclear if the Boomers game will go ahead after US guard Bradley Beal was forced off the team under the team’s COVID-19 health and safety protocols.