Perth Wildcats duo Bryce Cotton and Brady Manek have combined for 53 points to hold off a late charge from South East Melbourne Phoenix and inspire a 103-96 victory.

After snapping a five-game losing streak in their last start against Adelaide, Perth entered Thursday night’s home clash at RAC Arena seeking to avoid a fourth straight home defeat – something the league’s most successful franchise haven’t experienced since 1998. 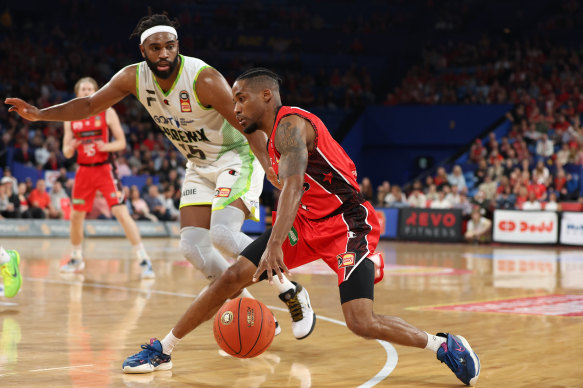 Bryce Cotton of the Wildcats drives to the key against Kyle Adnam of the Phoenix.Credit:Paul Kane/Getty Images

The Wildcats appeared to be cruising to victory with a comfortable 18-point lead early in the final period thanks to the efforts of Cotton (32 points) and Manek (21 points) but South East Melbourne stormed home with 37 fourth-quarter points to trail by three with 27 seconds to play.

But Perth held their nerve in the closing seconds, thanks to late baskets from Manek and Luke Travers, to improve their win-loss record to 5-5 as they continue to build momentum following their recent form slump.

“Obviously, Phoenix played with more intent and a greater purpose in that fourth quarter and became disruptive to us,” Perth coach John Rille said after his side almost gave away a big lead in the final quarter.

“It seems like we’re always saying in these situations that there’s the makings of something good, but we’ve got to just keep chipping away at it and making it last for longer parts of the game, instead of just saying we were good for 20 minutes.”

After copping some criticism for a slow start to his professional career with the Wildcats, American import Manek has found his shooting touch by hitting 11-of-15 three-pointers to help Perth win their past two games.

“Brady copped a lot of flack but he persevered most importantly and now everyone’s seeing what the perseverance is doing – and I’m going to guess he will become a fan favourite awfully quickly,” Rillie said about the former North Carolina Tar Heels star.

The Phoenix held an early 21-20 lead but Perth clicked at both ends of the floor in the second quarter, outscoring the visitors 31-14 to take a 13-point edge into the main break.

Facing their largest halftime deficit of the season, South East Melbourne threw everything at the Wildcats in the hope of claiming another nail-biting win in Western Australia – the Phoenix had won their last three games at RAC Arena by a combined total of 4 points.

But the visitors fell agonisingly short despite a wholehearted performance from Mitch Creek (32 points, eight rebounds) and need to bounce back against Melbourne United in the local derby on Saturday in order to avoid a third straight loss.