Mitch Creek’s “unbelievable” dunk on Matthew Dellavedova has reverberated around the world but the South East Melbourne Phoenix star says at the time he wasn’t too sure what he had done.

Creek’s astonishing leap and one-handed jam in the third quarter was not only the standout moment of Sunday’s Throwdown XIII derby against Melbourne United, won 94-86 by the unbeaten Phoenix, but sparked a melee that was being reviewed by NBL officials on Monday.

United’s Mason Peatling was ejected for knocking Creek over, while Creek was hit with a technical foul, having stood over Dellavedova and taunted the former NBA guard.

The entire episode was later shown on ESPN’s US flagship daily show SportsCentre, while Creek has had more than 10,000 likes on the post of the dunk on his Instagram page.

However, the athletic forward said on Monday he was unsure at the time what he had even done.

“I was really baffled when someone said: ‘That was a crazy dunk’, I was like: ‘Did it go in?’ I didn’t actually know. There was so much going on. I realised it kind of went in. When I looked down, it was just him [Dellavedova]. I was just yelling. I had a lot of energy in the body and I was just yelling to make some noise.”

Creek said he had no reason to apologise for dunking as viciously as he had on Dellavedova – the former Cleveland Cavalier also said he had been dunked on “worse than that before” – and denied he had flopped when bumped by Peatling.

“No, not at all. I literally turned, I didn’t see him coming. I was still yelling and screaming like an absolute idiot,” Creek said on SEN.

“I was pretty tense. I, obviously, had the arms pumped. I was yelling as I turned, I kind of just got blindsided, I didn’t see it at all. I didn’t realise what had happened until I hit the deck. Then once my brain went ‘that’s probably not OK’, that’s all it took for me to jump up. 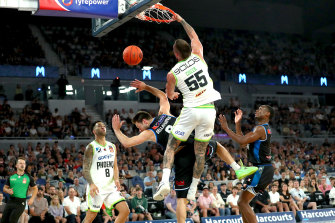 “The reaction I had may not have been the most professional but at the same time, you take the basketball away from it, that was just an inappropriate play and something we won’t stand for as a club and me, professionally, I won’t stand for, for my team and myself. It definitely brings a bit more spice to the throwdowns.”

Creek’s teammate Izayah Le’Afa was also hit with an unsportsmanlike foul for his role in seeking retribution on Peatling.

Phoenix coach Simon Mitchell urged the NBL to investigate whether United’s acting captain David Barlow should have been ejected for leaving the bench when the fight broke out. 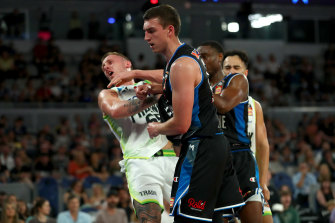 “I’ve got a question for the reviewing panel. I see Dave Barlow approach the fracas off the bench,” he said.

“Don’t get me wrong, Dave was being a peacemaker, but I don’t think he should have been allowed to play any further part of the game because of that. Our guys kept their cool, stayed on the bench and did the right thing. I want answers to that.”

Melbourne coach Dean Vickerman insisted Barlow had not broken any rules. The NBL said on Monday the entire melee was under investigation.

Vickerman also found himself in the spotlight in the third quarter when during a broadcasted timeout he called Phoenix guard Kyle Adnam “the f—ing shittiest little defender in the league,” demanding his team attack the guard on offence.

Vickerman later apologised but Adnam, a former United championship player, said he took the sledge “personally”. The NBL has seen broadcasting timeouts as a way to take viewers into the inner circle.

Winless United hope captain Chris Goulding (hamstring) returns for the blockbuster clash against the Sydney Kings on Thursday night at John Cain Arena, while the Phoenix – buoyed by the impressive form of Chinese star Zhou Qi – travel to Sydney to face the Kings on Saturday.