Two of the big questions bumping around the NBL revolve around whether Australian NBA centre Thon Maker could play in the league this season and when the next Throwdown between Melbourne United and South East Melbourne Phoenix will be played.

Following the chaos of last Sunday’s Throwdown, both clubs would surely love to play the next game as soon as they get back to John Cain Arena in early February after the Australian Open finishes.

The league has only announced the fixture up to round six and there is much anticipation around the next section of games and when the Throwdown could be played.

But there was no word on Thursday when Hoops Heaven asked, with the league busy locking in the fixtures for January.

When Steph Curry passed Ray Allen’s NBA record for threes with his 2974th three on Wednesday, the @NBLfacts account had the NBL comparison ready to go.

Andrew Gaze is the all-time leader threes leader on 1826, with Shane Heal in second on 1602.

The active leader is Melbourne United’s Chris Goulding on 862 threes. NBLfacts estimates it would take him another 14 seasons at the current pace to reach Gaze’s total.

NBL move on the cards for Maker?

The Thon Maker to NBL question arose this off-season, but he signed with Hapoel Jerusalem.

However, Maker and the team parted ways this week after just over three months and many fans are asking if an NBL team could snare him. 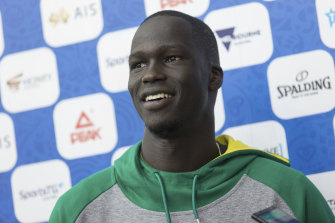 On the move? Thon Maker.Credit:Paul Jeffers

I’m sceptical he would want to come home. He has always had such a determination to remain available to join an NBA team, which would make the NBA G-League more likely.

Right now, all NBL roster spots are filled (though United have an import spot available, Maker is not eligible), as are team salary caps.

The only way I could see Maker in the NBL would be as an injury replacement player or if someone left a team mid-season; let’s hope it doesn’t happen that way.

But one factor that could force a team to look at Maker is the form of Duop Reath in Illawarra and Zhou Qi at South East Melbourne Phoenix. Few teams have good match-ups for such agile centres.

Thon’s younger brother Matur Maker and his cousin Makur Maker are on the Sydney Kings roster, with Makur showing some promise in his minutes in opening round.

NBA legend Dirk Nowitzki admits he never had dreamed foreign players would be as celebrated in the US league as they are now.

Nowitzki was drafted by Milwaukee at pick nine in 1998 and was then traded to Dallas, along with Pat Garrity, for the sixth pick Robert “Tractor” Traylor and many around the league doubted whether a skinny foreign kid could handle the NBA. 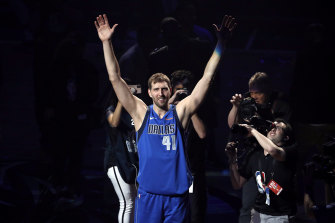 But Nowitzki proved them wrong and laid the groundwork for more international stars to come, such as Australia’s Giddey, who was the sixth pick in the most recent draft.

Nowitzki made time to speak to international media on Tuesday morning (AEDT) ahead of the NBA’s annual Christmas Day games, his jersey retirement in Dallas on January 6 (AEDT) and making the NBA’s 75th anniversary team.

The German international was generous with his time for the 80 plus journalists and even took extra questions.

Hoops Heaven was there for the early morning call and asked Nowitzki about the pride he took in seeing the likes of Luka Doncic, Giannis Antetokounmpo and others as franchise players.

“Now guys have an impact, not only on their team, but they’re franchise players, guys that have an impact on the communities where they come to and as an international player that makes me proud.

“It’s gone to a fun, sharing-type basketball. The game has really evolved in 20 years, which plays into the hands of the international players that are very skilled and can make shots, and the bigs that can make plays off the dribble.

“So the change of the style of play over the 20 years that I played [has led to the] the tremendous amount of international players we see today.”

Nowitzki already has a street named after him near the American Airlines Centre and will reportedly also have a statue at the stadium in the near future.

“It’s very humbling that when I first left Germany as a 19- or 20-year-old kid, that over 20 years later I would have had all this stuff in Dallas. [Back then] I would have said you’re absolutely out of your mind, this is never going to happen,” Nowitzki said.

A devastated Sydney University Flames side will stand with WNBA import Steph Watts, who tore her anterior cruciate ligament at training on the weekend.

Watts starred in her first WNBL game with 16 points and the Flames had their game with the University of Canberra Capitals postponed last week due to a person in the Capitals club testing positive for COVID-19.

Watts is expected to have surgery on her knee in Australia and begin her rehabilitation here. Her mother is expected to travel to Sydney to support her.

The Flames rate Watts highly as a player, leader and teammate, which will make finding a replacement very difficult.

“We will help her from now and make sure she is looked after,” Flames coach Shane Heal said in a statement.

“I know she will come back bigger and stronger, but it was definitely an emotional time for us all.”

The Flames are scheduled to play the Fire in Townsville on Saturday.