The NBA champion this season will be the last team standing.

Kawhi Leonard of the Los Angeles Clippers missed Game 5 of the Western Conference semifinals with a knee sprain and amid concerns that it could be a far more significant injury. Brooklyn’s Kyrie Irving has been sidelined by a badly sprained ankle.

Philadelphia’s Joel Embiid is playing through a meniscus tear. Atlanta’s Trae Young is putting heat packs on his shoulder that appear to be roughly the size of a small vehicle. Brooklyn’s James Harden came back despite an ailing hamstring. 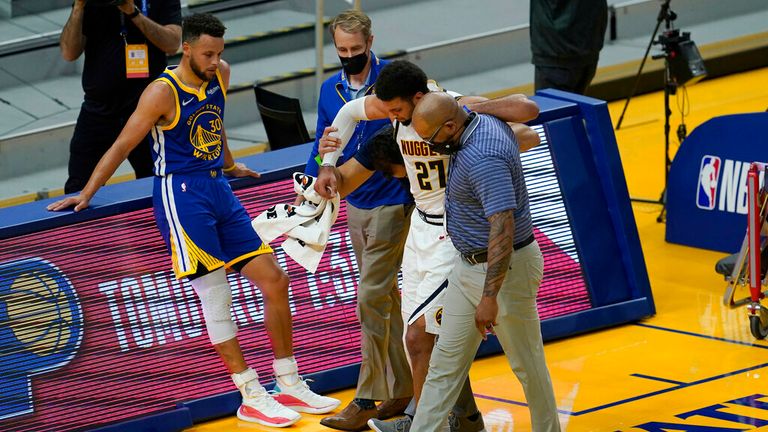 Those are big names, All-Star names, all nowhere near their best right now because of injuries, and there were plenty of other top players – the Lakers’ duo of LeBron James and Anthony Davis, Denver’s Jamal Murray and Miami’s Victor Oladipo among them – that also either limped to the finish of their seasons or saw them end prematurely because of serious injury.

“This is the best time of the year for our league and fans but missing a ton of our fav players,” James tweeted on Wednesday. “It’s insane. If there’s one person that knows about the body and how it works all year round, it’s ME!

“I speak for the health of all our players and I hate to see this many injuries this time of the year. Sorry fans wish you guys were seeing all your fav guys right now.”

They all didn’t wanna listen to me about the start of the season. I knew exactly what would happen. I only wanted to protect the well being of the players which ultimately is the PRODUCT & BENEFIT of OUR GAME! These injuries isn’t just “PART OF THE GAME”. It’s the lack of PURE

RIM REST rest before starting back up. 8, possibly 9 ALL-STARS has missed Playoff games(most in league history). This is the best time of the year for our league and fans but missing a ton of our fav players. It’s insane. If there’s one person that know about the body and how it

works all year round it’s ME! I speak for the health of all our players and I hate to see this many injuries this time of the year. Sorry fans wish you guys were seeing all your fav guys right now. 🙏🏾👑

Consider the 27 players who were selected for the All-Star Game this season. Leonard becomes the eighth of those to have to missed a playoff game this season because of injury, joining Davis, Utah teammates Mike Conley and Donovan Mitchell, Boston’s Jaylen Brown, Harden, Irving, and Embiid.

Phoenix’s Chris Paul might become the ninth on that list. He’s not hurt. He’s in protocols – that other thing that the league has had to fight with all season.

Even though the arenas are full and masks are now largely optional, the pandemic is still here and might have a say in how the rest of these playoffs go as well. Paul, who is vaccinated, has entered the protocols presumably because of a positive test – only one player tested positive this week, and he’s the only one in the protocols. As such, his status for Game 1 of the Western Conference finals next week is unknown.

Another All-Star, another curveball from the basketball gods overseeing luck right now.

“So, we don’t feel like we’re the only ones dealing with a situation when it comes to health and trying to stay healthy. It’s what you prepare for as a staff and as a team and we feel like our guys are ready for whatever presents itself.”

Some injuries, it can be argued, may have happened because of an accumulation of wear and tear in a compressed 72-game season. Others were simply acute, the bad luck variety. Irving landing on Giannis Antetokounmpo’s foot and twisting his ankle had nothing to do with the Nets playing a bunch of back-to-backs this season. James laboured through a high ankle sprain for the rest of the season after getting crashed into by Atlanta’s Solomon Hill. More bad luck.

And it should be mentioned that injuries also played a role in last season’s playoffs, and probably have in every season’s playoffs. Miami was without Goran Dragic and Bam Adebayo for much of the NBA Finals last fall against James, Davis and the Lakers; the Heat lost that series in six games.

But there’s no denying that this regular season was dominated by the pandemic and by injuries. It’s unfortunate, though weirdly fitting, that the playoffs are following suit.

A month or so from now, the NBA will have a new champion. Odds are, it’ll be the team that stays the healthiest the rest of the way.