The Australian Opals finally secured their place in the quarter-finals of the Tokyo Olympics with just 28 seconds to play against Puerto Rico on Monday night.

Needing a 25-point win to progress in the last possible position, the Opals beat Puerto Rico 96-69 to make it into the last eight. 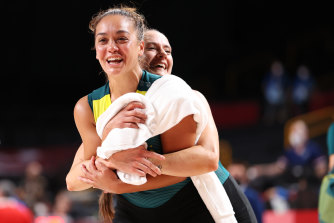 Leilani Mitchell celebrates after the Opals advanced to the quarter-finals.Credit:Getty Images

The coaches hugged, the players hugged and the release of emotion was as though they had won the game at the buzzer rather than by 27 points.

The veteran heads of the Opals were the heroes, with Marianna Tolo scoring 26 points and pulling in 17 rebounds while captain Jenna O’Hea had 15 points and four assists. Cayla George finished the last term on fire with 19 points, seven rebounds and five assists.

Puerto Rico’s former WNBA player Jazmon Gwathmey scored 26 points and did all she could to stop the Opals from progressing. 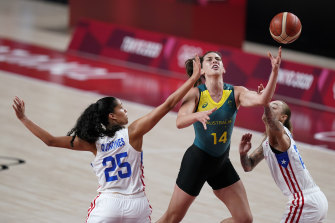 Marianna Tolo put in a huge performance for the Opals.Credit:AP

The Opals didn’t reach a 25-point lead until George made a fadeaway and was fouled with 28 seconds to play, but once they reached that margin they held on.

A neutral fan watching the first half would have thought Puerto Rico were fighting to stay in the tournament and the Opals getting ready to go home as Puerto Rico took an 8-0 lead by shooting freely and attacking with aggression.

Defensively the Opals couldn’t find regular stops while their starters looked dysfunctional until Tolo, O’Hea and Sara Blicavs were thrown on. 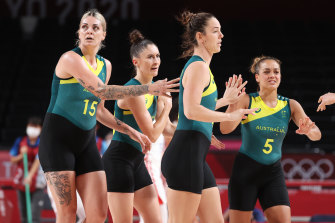 O’Hea’s shooting and Tolo’s play around the basket saw them catch up but they still trailed 24-22 at quarter-time.

Tolo kept cutting and scoring in the second term but the Opals couldn’t summon the right tempo and the right level of defensive pressure to force the Puerto Ricans to do something more than shoot from outside.

Tessa Lavey gave the Opals a jolt off the bench as they led 45-44 at half-time but it meant little considering a team that was averaging just over 50 points per game was already there.

Australia had to speed up in the third term and they went on a 12-4 run coming out of the main break but despite tiring, Puerto Rico kept fighting and refused to give the Opals any easy scores.

Ezi Magbegor found room to operate inside but while the lead started to grow, time began running down. Puerto Rico kept the ball in place and rarely committed turnovers.

But fatigue was kicking in and in the Opals burst out to a 16-point lead in the final minutes of the quarter with Rebecca Allen’s three topping off the run.

The Opals pushed the lead to 20 but were frustrated by their own misses and Gwathmey’s shooting as the former WNBA forward shot from outside and her teammates worked down the clock trying to limit the chances for the lead to grow.

Then George, Tolo and O’Hea took over.

Bring on the quarter-finals.