The Australian Opals have found their shooting stroke and built some confidence ahead of their most important games of the FIBA Women’s World Cup.

The Opals thrashed Mali 118-58 at Qudos Bank Arena on Friday night to take their record to 1-1 [win-loss] but they now face the games that will decide if they remain in the race for the medal rounds. 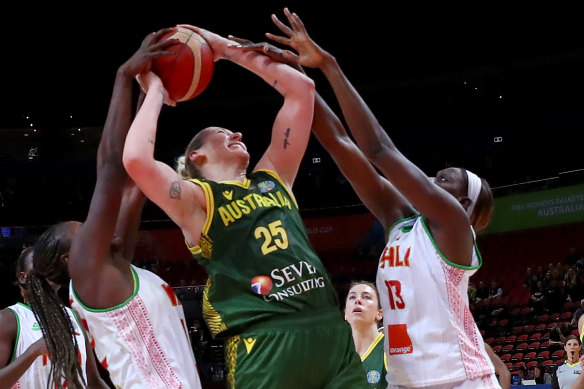 Lauren Jackson drives to the basket in the Opals’ win over Mali on Friday night.Credit:Getty Images

Ezi Magbegor led the Opals with 15 points, while Sara Blicavs, Darcee Garbin and Cayla George all had 14 points as Australia got over their shooting struggles from the opening-night loss to France, making 56 per cent of their outside shots compared to 21 per cent on Thursday.

Most importantly, none of the Opals appeared to pick up any injuries.

Australia will face Serbia on Sunday at 6pm, followed by Canada and Japan on Monday and Tuesday. If they can win all three they will give themselves the best possible chance to finish in the top-two in their group and avoid the US in the knockout quarter-finals.

“We are looking forward to playing Serbia on Sunday as we owe them one for qualifying earlier in the year when we had a tough game against them over there [Belgrade],” George said. 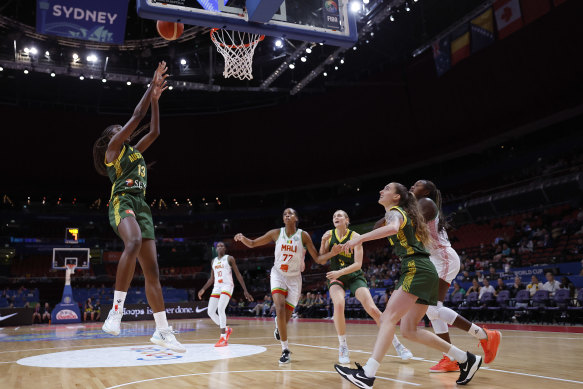 Ezi Magbegor shoots during the clash with Mali at the Sydney Superdome.Credit:Getty Images

Mali got off to a sparkling start, leading 10-2 in the opening minutes as the Opals struggled to find their shots and couldn’t match the energy.

Opals coach Sandy Brondello called time-out and threw veteran bigs Lauren Jackson and Marianna Tolo into the game and it swung the contest in the home side’s favour.

Tolo found room to score around the basket, as did Jackson, while Australia’s defence went up a gear as the team went on a 19-0 run and never looked back.

Starting centre Magbegor had her challenges to find space to attack against France on Thursday night, but she found some confidence as the Mali game went on, as did George who found her shooting stroke from outside, making four of six three-pointers.

Jackson was rested in the second half, while Tolo was also kept mostly on the bench.

Opals guard Kristy Wallace was floored by an overzealous block attempt by a Mali player in the third quarter, but she got up and kept playing.

Canada moved into top-spot in group B with an impressive 59-45 win over France, while Serbia bounced back from a loss to Canada on Thursday with a 69-65 win over Japan on Friday.

The Canadians are now the only undefeated team in the group as France are joined by the Opals, Serbia and Japan with 1-1 records and all three could end up in tiebreakers in this very close group.

Saturday is a rest day for group B.