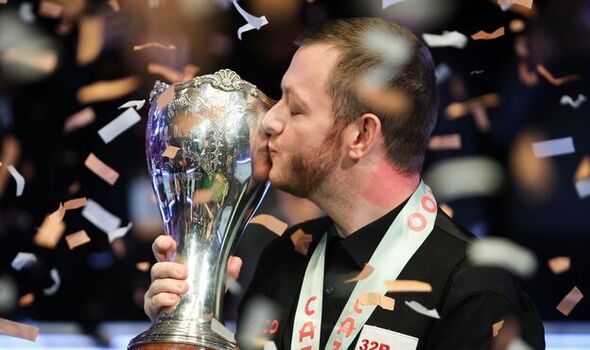 Ronnie O’Sullivan didn’t hold back in his assessment of Mark Allen in the UK Snooker Championship final before the Northern Ireland player stormed back to beat Junhui Ding. Trailing 6-1, Allen then upped the ante to win nine of the next 10 frames and capture the title for the first time.

Afterwards, Allen fired a dig at long-time rival O’Sullivan, who had been whitewashed in the quarter final at the hands of Ding. Referencing the world No 1’s claims that he no longer enjoyed playing snooker, he joked: “Everyone entered this tournament (wants to win), maybe Ronnie aside because he doesn’t like snooker, he likes punditry!”

O’Sullivan seemed unimpressed by the jibe, only offering a blank expression in return. But Allen’s words may have been stronger had he heard the assessment of him during the final when he was trailing the Chinese star.

JUST IN: Mark Williams dumps underwear in bin after soiling himself during UK Championship clash

“He just can’t pot a ball,” said O’Sullivan on Eurosport. “I’ve never seen anyone play so bad, it’s the worst I think I’ve seen from anybody in a long, long time. A lot of that’s got to do with Ding. He’s just playing fantastic snooker.”

However, O’Sullivan did later acknowledge Allen’s incredible turnaround, comparing him to comeback king Mark Selby: “It was amazing, it was Selby-like really, you didn’t give him a shot,” he said. “He didn’t pot a ball for about 53 minutes. A lot of people could jump on Ding for that but he didn’t do a lot wrong, he played alright.”

O’Sullivan wasn’t afraid to be outspoken during the tournament, both as a player and a pundit. And he was slammed as “selfish” and “irritating” by Shaun Murphy, who accused him of being a poor ambassador for the game.

He also claimed he would turn down the cash prize if he notched a maximum 147 break. The seven-time world champion said the 15k on offer was not sufficient and didn’t motivate him.