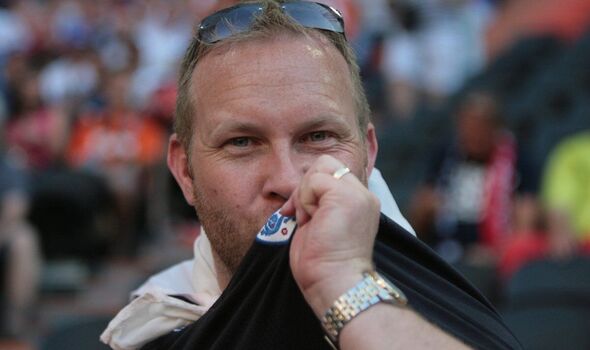 When watching a sports event from home, 23 percent will always sit in the same part of the sofa, and similarly, 22 percent have a “lucky” seat in the stadium, that they will always occupy if watching sports live.

More than a fifth (22 percent) refuse to watch a match with specific people who they feel are “unlucky”.

And during tournaments, almost a quarter (23 percent) of superstitious sports fans even claim they won’t have a wash, if results are going the right way.

To mark the research, sports betting platform OLBG.com has created a quiz, to test fans’ knowledge of the pre-match rituals of their favourite sporting stars.

A spokesman for OLBG.com, which created a quiz and commissioned the research, said: “Clearly the nation’s sport lovers are full of superstition.

“Fans are a passionate bunch and will do anything they can to give their side an edge, whether it’s got any basis in reality or not.

“For many, this is probably based in a feeling of frustration they can’t actually get on the field and help the team that way – so it makes them feel they’re doing something.”

Other common sporting rituals revealed in the research included 18 percent calling on a higher power and saying a prayer if they feel their team or favourite athlete needs a boost.

Overall, 58 percent of respondents believe in luck – both good and bad – and one in ten believe their favourite sports team or personality is generally unlucky.

Of those with sporting rituals, a whopping 91 percent genuinely believe the outcome of an event has been impacted by their pre-event ritual.

More than half (56 percent) have had a gut feeling in the past that their favourite performer was going to do the business.

And one in three (32 percent) “always” trust their gut feeling when it comes to the outcome of a sporting event, according to the OnePoll figures.

OLBG.com’s spokesman added: “Sports fans usually fall into a fatal trap when it comes to their own sides – overconfidence.

“Especially when it comes to things like putting a bet on a game, either as a single result or in an accumulator.

“Trusting your gut is great when it’s something you can be somewhat impartial towards – but sports lovers are often led by their heart, and not their head.”