Melbourne United are refusing to let disappointment foil their chances of an upset semi-final win over the Sydney Kings.

The Kings, the NBL's minor premiers, overturned a 16-point deficit with six minutes remaining to win 86-80 in game one of their best-of-three series in Sydney on Saturday night, and can book a place in the grand final if they beat United at Melbourne Arena on Monday night. 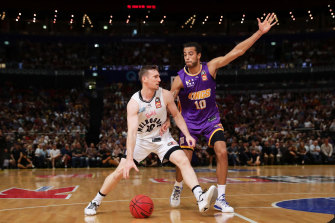 But Melbourne still believe they can defend their home court and then win the series in Sydney.

"We feel, while not taking any credit away from the Kings, that we should have won that game," McCarron told The Age on Sunday.

"We come back home and we expect to play the same, if not better.

"We've been getting better for the last month in each and every game. Each time we are playing at a higher level, and game one was another good example.

"If we continue that trend, then there is no reason why we still can't win the series."

Melbourne kept Sydney to their lowest score in the five times they have played this season, and coach Dean Vickerman praised much of his side’s performance.

But he also wants his players to be more physical defensively to match the Kings, who defended with greater ferocity in the final term.

Vickerman said post-game he wanted his players to either use those same physical defensive tactics, especially to bump Sydney's cutters and move players out of position, or he wants referees to step in and call more fouls.

McCarron said he would welcome a more physical game.

"It's the finals, so I don’t mind if they will allow physicality off the ball. As long as it's called the same way (for both teams) you won’t hear complaints from me," McCarron said.

"They were desperate and making a comeback, so I don't think they were going to stand back and let things happen.

"They tried to disrupt us, and to their credit they did that."

Kings' All-NBL first team power forward Jae’Sean Tate had a game-high 23 points including four three-pointers, and McCarron said his side may have to live with the results if Tate is making his outside shots considering how strong the American has been attacking the basket.

McCarron wants United to control the tempo and use their home crowd to their advantage, and are confident they can again build a lead on the Kings before this time finishing it off with a victory.

"We want to control the tempo, but I don't think we were out-paced or lost our way too much," McCarron said.

"We've watched the tape and know what we need to do differently.

"If we stop guys like Brad Newley getting downhill on us and clean up a few things, then it might be a different result."

Melbourne United play Sydney Kings in game two of their best-of-three semi-final series at Melbourne Arena on Monday at 7.30pm.