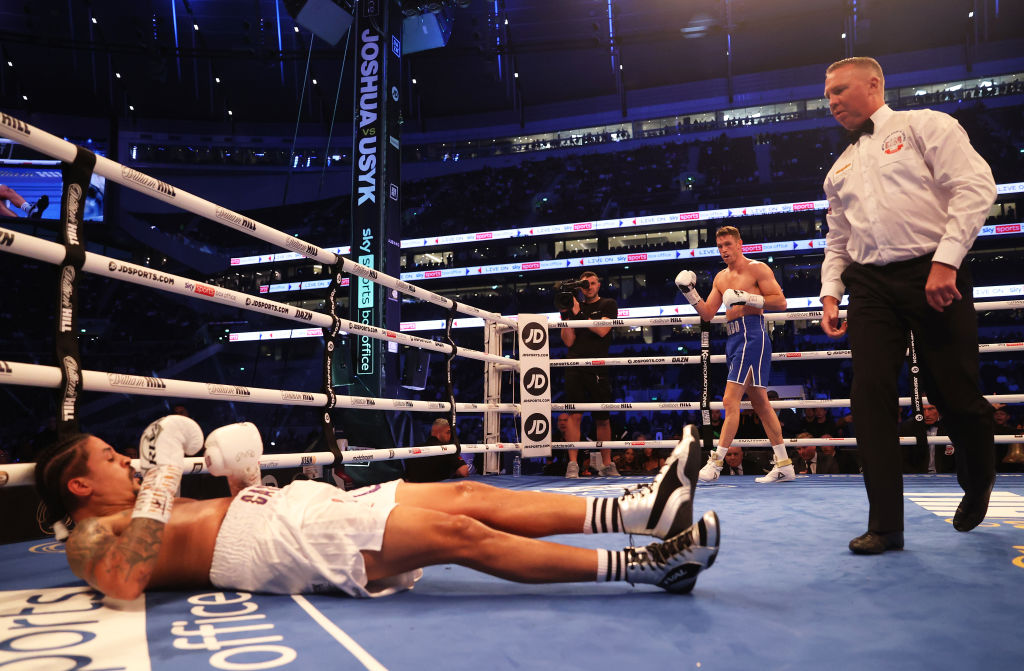 Callum Smith has passed on his best wishes to Lenin Castillo after his brutal knockout victory over the Dominican fighter on the Anthony Joshua versus Oleksandr Usyk undercard.

Castillo was floored by a devastating shot in the second round and referee Bob Williams immediately brought the light-heavyweight bout to a halt as the 33-year-old lay on the mat with his legs shaking.

Smith wheeled away to celebrate but returned to the centre of the ring when it became clearCastillo’s condition looked serious, with the latter having to be carried away on a stretcher at the Tottenham Hotspur Stadium.

Eddie Hearn has since confirmed Castillo was ‘responsive’ as he made his way to hospital and Smith reached out to his opponent with a message of support as he reflected on his win with Boxing UK.

‘That’s never nice to see, to be honest with you, especially when it’s you involved in it,’ the 31-year-old Brit said.

‘It’s a sport at the end of the day and I was just hoping he left the ring safe.

‘I wanted to win but you never want to win in that way.’

Asked whether it was a lonely place when Castillo was being carried out of the ring, Smith replied: ‘Yeah, definitely.

‘It’s not nice. I celebrated before and then I realised how bad it was.

‘That’s the last thing you want to see. Boxing is a tough enough sport as it is and we all have families to go home to.’

The Liverpool-born star opened up on how he prays for the safety of both himself and his opponent before fights.

‘I always pray before fights and it’s never to win. I always just pray for my own safety and the safety of my opponents. It is a sport at the end of the day,’ he added.

‘I’ve never been one to get involved in the bad mouthing and taking it personally.

‘It always has been a sport to me. I want to prove I am better than the man facing me, but I never want to inflict any more damage than necessary.

‘That was scary, not going to lie.’

Smith, who took his record to 27 wins in 28 fights, was relieved to hear Castillo was responsive.

‘I hope everything’s okay. Boxing’s a tough sport and every now and again you do get a bad injury through it, but I’m hearing he’s responsive,’ he went on.

‘Obviously as a precaution he’ll be taken to hospital but I’m hoping everything is okay.’