‘I cost society £1million – then this place changed my life’: Cyle Carth was in and out of prison but then a South London boxing club gave him the tools to build a career

The guy with paint on his hands is walking the corridor of a community centre in Battersea. He stops to look at a sobering wall, covered with the faces of those who have been lost.

There’s the girl who left a while back and was murdered in Brazil and there’s the lad who was stabbed to death only a few weeks ago. There’s also the young man who was knifed in the neck by someone who started the evening as his mate.

At some point or other they all passed through these doors and now they have all passed on, the ones who didn’t make it. There’s a few of them on this wall. 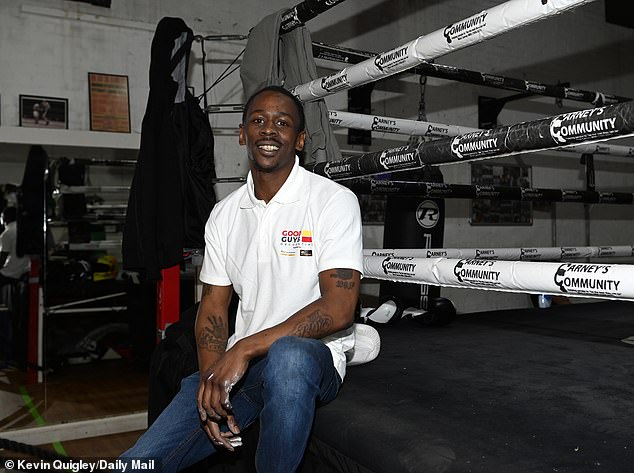 For that reason, the redeemed man is staring ahead in silence, and so is the golden-hearted figure by his side who has kept him and so many others from joining them.

Together they operate in a world of deprivation that most of us cannot comprehend, and it is in that place where the deepest crises of grassroots sport are being felt during this pandemic.

Here, at Carney’s Community on Petworth Street, with multi-million pound homes to its left and two estates of considerably less privilege to the right, it is a greater issue than not being able to swim lengths or use a treadmill.

It’s about more than the loss of five-a-side or golf, vastly important as they are to us. No. It’s about the boxing ring in the next room and its unique ability to reach into the dark and forgotten corners of society.

‘Boxing helped pull me out,’ says the man with the paint on his hands.

His name is Cyle Carth, at 31 the holder of a long criminal record but more lately the proud owner of Good Guys decorating company.

He is one of the success stories, both of that ring and of George Turner, who put it there. Turner is the chief executive and heartbeat of Carney’s, a 40-year-old who has spent 20 of those working with the most troubled souls in London. He has been to 28 funerals in that time and by his count ‘a couple were from road accidents and the rest were murders’.

The two men sat down one day to tot up a different set of numbers — the ones that related to Carth and his offences.

Growing up in a fatherless home in Wandsworth, south London, he was stealing mopeds at eight, had been kicked out of three schools by 11, was jailed for the first time at 14, and then a few more times for everything from GBH to robbery until, finally, he received his seventh and longest sentence of four years at 23. 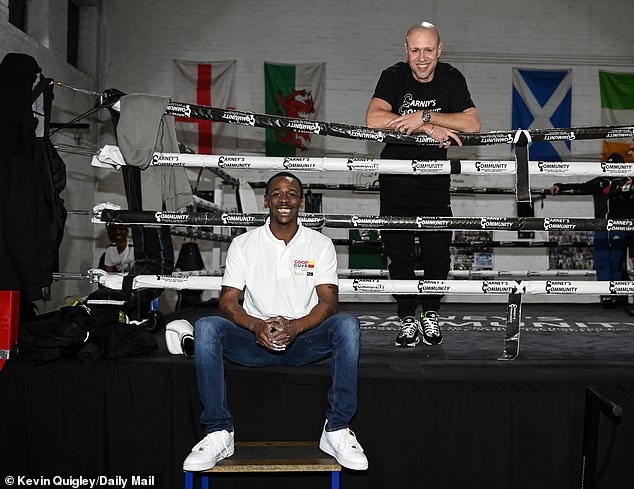 Founder of Carney’s Community Centre, George Turner, pictured with Carth by the ring

He got out after two and figures he spent something like ‘eight years out of 11 from the age of 14 in prison’.

With that in mind, he and Turner once used an online tool called a negative costings calculator. ‘You put in how many times you have been arrested, days in prison, days unemployed, all that, and it tells you how much you cost society,’ says Carth. ‘Mine was about £1million. I reckon if they just gave me that as a kid I would have behaved.’

The last line is delivered as a joke but it is an astonishing figure, particularly for the fact that Carth entirely doubts the role played by the correctional system in his rehabilitation, which has seen him crime-free for seven years. And that brings him back to Turner and Carney’s and boxing.

In his capacity as a youth worker, Turner started taking an interest in Carth when he was about 11, and after making only incremental early progress in dealing with his behaviour, he played the boxing card at 14.

‘That’s the hook,’ Carth says. ‘When people talk about getting hard-to-reach people off the street and into a place where they can start to change, then boxing is the hook.

‘It was the hook because it was the sport that no one turns their nose up — it was manly, good for image. You come inside, do some boxing, and suddenly you’re actually being influenced by positive role models.

‘I didn’t change overnight. It took years and years for me to change, loads of times of going back to prison and George visiting and calling me an a******e, but he stayed with me, was consistent in my life, and eventually I have a business.

‘The thing that really got me through the door to Carney’s, the place that changed my life, was boxing.’ 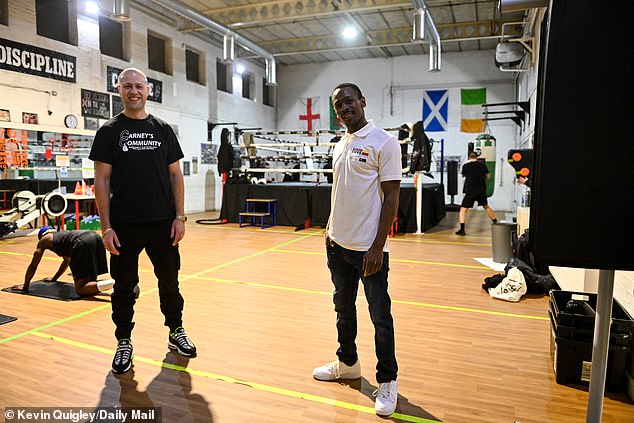 In the pre-Covid times, up to 70 people from deprived backgrounds were stepping off the street and into Carney’s for each of the three boxing sessions a week. They would be trained for free, and then fed for nothing, all in return for the promise that if they ever got on their feet, they would do good for someone else.

Dozens have been given work by the centre as boxing trainers and personal trainers for the more affluent neighbours, and one, Callum Myles, has gone on to become a professional fighter.

But there was never an aim for Carney’s to become a competitive boxing club — their successes are measured in other ways. Indeed, one of the participants is now managing a Lidl, and while we speak, there is a lad working out downstairs who was once shot in the chest at point-blank range and now has a law degree.

Turner says: ‘You only have to see how a kid reacts if you ask him to lead something as simple as the boxing session warm-down. He might never have had responsibility before, he might be a bit scared, but once he has done it, you see him believe in himself that tiny bit more. From that belief, you can develop. This place is about more than boxing but boxing is a big part of how it starts.’

The worry in all this is what gets lost through Covid restrictions. Exemptions for those who work with the under-privileged mean Turner and his 19 staff can work with bubbles of up to 15 but legislation keeps them on a structured, invite-only basis, which runs somewhat counter to the drop-in nature of the centre.

‘The hardest to reach people, the ones we really need to help, are the ones that are not coming by any more,’ says Turner. ‘Maybe 50-ish a week are coming in to do a bit of boxing fitness compared to 70-ish before but I’m concerned about those who aren’t. This isn’t a great time for people.

‘We have lost two to knife crime in the past year.’

Financially it has also been a challenge. It costs around £330,000 a year to run the centre and around a third of that comes from the social enterprise projects such as boxing training sessions run by the participants — income that has been lost.

They have been kept afloat to an extent by the excellent backing of Laureus Sport for Good, the charity that uses sport to help young people overcome violence, discrimination and disadvantage, and they are getting by.

But it is troubling to think about those folk who once saw a ring and, from there, a way up. The hope is that they can stay off that wall.