David Haye and Derek Chisora have ended their two-and-a-half-year partnership.

Haye became Chisora’s manager in 2018, forming one of boxing’s most unlikely alliances.

The partnership was announced six years after the pair's infamous brawl in Munich, which took place at a press conference following Chisora's loss to Vitali Klitschko.

After mocking Haye for an injury he had suffered in his previous bout against Vitali's younger brother Wladimir, Chisora confronted his fellow Brit at the press event and was met with a glass bottle to the face.

Chisora went on to claim that he would shoot Haye and was later arrested by German police.

The pair later met in the boxing ring with Haye victorious via fifth-round stoppage.

While the partnership between the former rivals initially proved unsuccessful after Chisora was spectacularly knocked out by Dillian Whyte at the end of 2018, Del Boy went on to pick up wins over Senad Gashi, Artur Szpilka and David Price.

In his last two bouts, Chisora has lost to undefeated Ukrainian Oleksandr Usyk and New Zealand's Joseph Parker, both via decision. He believes he won both fights.

In a statement, Haye told his fans that he will remain a fan of Chisora and that he is excited about what the future holds for Del Boy.

“It’s been an action-packed couple of years, getting Derek back in the mix of the heavyweight division, taking him from 'Delboy' to 'WAR' mode.

Who do you think Derek Chisora should box next? Let us know in the comments section below. 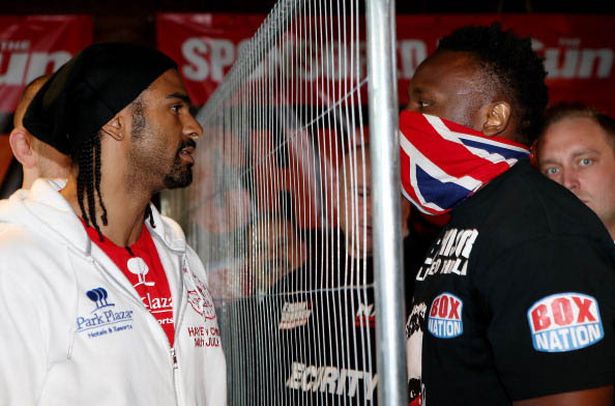 "When we announced our unlikely partnership we pledged to give fight fans the big nights of heavyweight clashes they have called out for and that I believe we have achieved.

"Whilst I will no longer be managing Derek, I will naturally continue to follow and support his career with great interest.

"The UK remains at the epicentre of the heavyweight division and Derek stands ready to go toe to toe with them all. 2021 is looking very exciting for him with a number of options available."

Chisora also shared a statement with his fans on Instagram, thanking Haye for his support and guidance during their partnership.

“Everyone close to me thought I was crazy when I told them I wanted David to manage me, but in the last two and a half years my performances in the ring have spoken for themselves.

"Giving fights fans the battles they wanted to see even when COVID put a handbrake on everything. I may have been robbed against both Usyk and Parker but have developed as a fighter.

"2021 is looking very interesting, I am back in camp, ready to go this autumn. It’s time for WAR. I would like to thank David for his support (at times patience…) and guidance during our time working together."

Now at 37 years old, Chisora surely doesn’t have much left to give at the top of boxing’s heavyweight division.

But, by parting ways with Haye, it seems Del Boy is searching for one last reinvention, and one more run in the sport he has competed in for 14 years.