Dillian Whyte says he is ready to face fellow Britons Tyson Fury or Anthony Joshua and is “hungry” for the chance to become world heavyweight champion.

Whyte, who will fight Russia’s Alexander Povetkin on 2 May in Manchester, is the mandatory challenger for the WBC world heavyweight title.

But the WBC says his tilt at the crown will not arrive until February 2021.

WBC champion Fury and Joshua, who holds the IBF, WBA and WBO belts, could meet in a unification bout before that.

Fury is first set to face Deontay Wilder in a trilogy fight, having defeated the previously unbeaten American last month to win the belt, while Joshua faces Bulgarian Kubrat Pulev in June.

In an insightful interview, Whyte tells BBC Sport how he has tried to arrange fights with Fury, why Andy Ruiz Jr has become obese, how Wilder could have lost his life and why he finally deserves his shot at a the heavyweight crown.

“I would fight any one of them. I just want to fight the best guys,” the 31-year-old told BBC Sport. “A guy is the number one challenger for a reason.”

Jamaica-born Whyte’s resume shows only one defeat – by Joshua in 2015 – and boasts wins over Joseph Parker, Dereck Chisora twice and Oscar Rivas.

He has held the WBC interim crown since July last year and has been forced to wait for a crack at the title.

“There are many guys who have gone through their careers and not fought the number one challengers, avoided guys, waited until they were 60 before fighting them. No, not me. I just want to fight the best.”

Whyte is backing Fury for another victory over American Wilder – the pair have agreed to a third fight in the summer, according to Fury’s US promoter Bob Arum.

“I know the champion never wanted to fight me because he was a coward,” said Whyte. “For me, it just shows how good I am. It makes me frustrated, it makes me hungry, it makes me train harder because I know that my time will come – he can’t run forever.

“He got bashed up in in his last fight so I think he will get bashed in again in the rematch, so it looks like I need to start looking at Tyson Fury. He’s someone I have been trying to make multiple fights with over the years.

“Either way, Fury, Wilder, Joshua, it doesn’t matter to me.”

However, Whyte says he would not be able to pick a winner should Fury and Joshua get in the ring for a potential unification bout.

“It’s a good fight,” he said. “They both showed different ends of the spectrum in their last fights – Joshua showed a bit of movement and a bit of boxing, one could read into that and say maybe he is gun shy or nervous and one could say he has improved his flexibility and his boxing skills.

“Fury has now all of a sudden become a front-foot fighter, which is something he has not done in years. It’s a very fine line, they both have a lot of ability and a lot of skill there.”

‘Ruiz couldn’t say no to the cakes’ 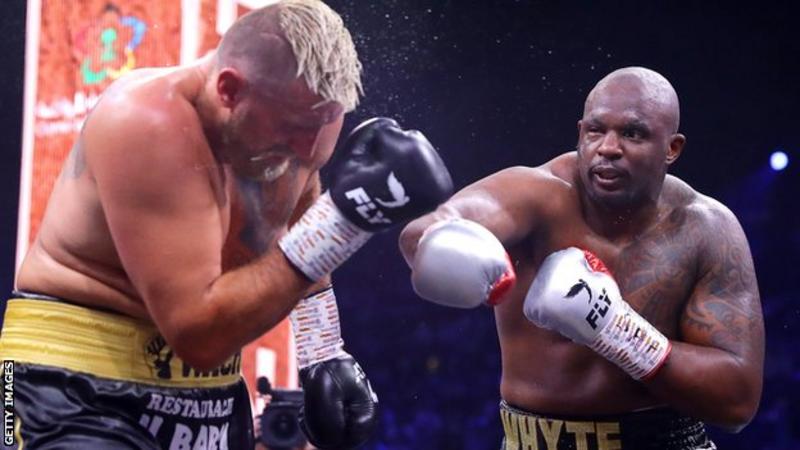 Another fight Whyte has been to trying to make is against Andy Ruiz Jr, the Mexican who inflicted the solitary defeat of Joshua’s career, only to lose the rematch and claim three months of partying had left him overweight.

“He won the world titles, he became obese, came into the fight in terrible shape and after I offered him a fight,” said Whyte.

“He wanted to get in more shape because obviously he had a weight watchers problem. He was fighting his weight, I understand that. I have been overweight before.

“But he only has himself to blame. He had everything to play for and couldn’t discipline himself. He lost his mind, lost his way and couldn’t say no to the cakes. Now he’s put a lot of weight on. Just tell the truth.

“I am the one who has told my people to go and find you, made you two offers – one in the UK, one in America. What more can I do? We are talking similar money you got to fight Joshua for the world title!”

‘Wilder could have lost his life’

Whyte was visibly concerned watching Wilder’s loss to Fury in Las Vegas last month, and says cornerman Mark Breland saved the 34-year-old’s life by throwing in the towel in the seventh round.

“The guy was getting creamed. I don’t understand why his corner didn’t pull him out,” said Whyte. “The one actual fighter in his corner, someone who has fought and understands, Breland who threw the towel in, is the one he is angry at.

“These other fake guys in his corner don’t know what they are talking about. They just want the money. They think the gravy train is going to stop so they are willing to risk his life.

“I believe they should have stopped it two rounds before, another round I think he could have lost his life. Breland did the right and the compassionate thing.

“If Wilder has any sense and wants to be world champion again, he needs to really think about what he is doing, show Breland respect and apologise to him. Work and box and listen to Mark, because the other clowns around him are just clowns.”

‘A guy is the number one challenger for a reason’ 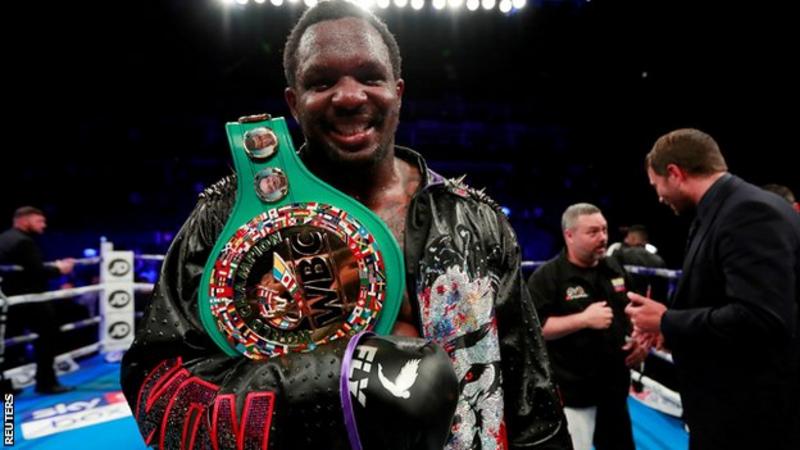 Before he gets a crack at Fury, Joshua or Wilder, Whyte must defend his WBC interim heavyweight title against 40-year-old Povetkin.

Whyte says he faces a “dangerous” opponent in the Olympic gold medallist and former WBA world champion but is not in the game of taking “easy fights”.

Whyte believes he does not get the recognition he deserves for his own record but is not paying too much attention to what those outside his camp are saying.

“That’s not my job, my job is to keep fighting the best people and keep winning,” he said.

“When I retire I want to look at myself in the mirror and say: ‘You know what? I fought everyone, never turned a fight down and I was world champion. I made a good living and I leave a good legacy behind and inspired a few people’.

“This is heavyweight boxing. I just have to stay ready. I should have been mandatory challenger and fought for the world title two years ago.

“I am still here, still trying to chase the elusive world title because of politics and promoters don’t like other promoters. It’s all nonsense.

“Back in the day, you had to face the number one challenger.”