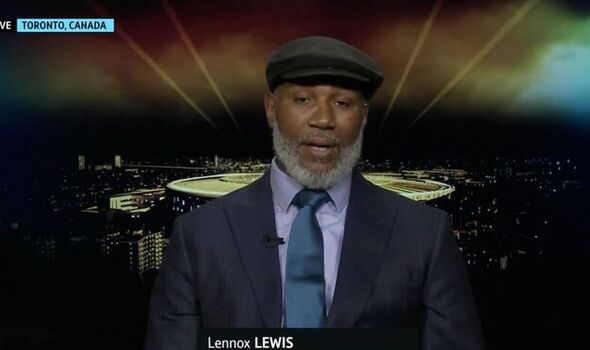 Lennox Lewis has hit back at Carl Frampton’s claims that Daniel Dubois should have been pulled out of his WBA regular heavyweight title defence against Kevin Lerena. The British fighter was rocked in the first round by a blow to the head, which inadvertently seemed to affect the 25-year-old’s knee as he went down two further times before being saved by the bell.

But after weathering the storm, Dubois steadied the ship in the second round. And then in an increcible turnaround, he unleashed a flurry of vicious punches in the third to secure a knockout win over the South African challenger.

But afterwards, pundit Frampton was more concerned with Dubois being sent back out for the second despite seemingly not knowing where he was. The former two-weight world champion said on BT Sport: “Dubois said, ‘What happened?’ Clearly concussed, didn’t know what was going on… For me that looked like a corner who didn’t have the fighter’s best interests at heart.”

Frampton’s anger seemed aimed at trainer Shane McGuigan, with the pair having endured a bitter split in 2017. And heavyweight legend Lewis clearly disagreed with the Northern Irishman.

For his part, Dubois, who took his career record to 19-1, struggled to explain what happened himself when he spoke afterwards: “It was amazing, he caught me on the top of my head and I think my knee went but I’ve got a heart of a warrior. I thought ‘oh f***’ when it happened,” he said.

“I didn’t feel the shot at the time, it’s one of those things, s*** happens.” The television station then had to issue an apology for his language before carrying on with the interview.

The bout took place on the undercard of the Tyson Fury v Derek Chisora heavyweight title fight, which Fury won via a tenth round TKO. After the clash, both Oleksandr Usyk and Joe Joyce were involved in a confrontation after being called out by ‘The Gypsy King’.