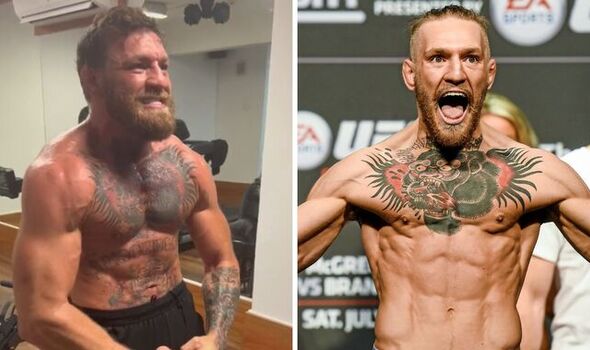 Conor McGregor has fired back at accusations that he is taking ‘performance-enhancing drugs’. The Irishman has bulked up considerably since he last entered the UFC octagon — leading to rampant speculation.

Under a video uploaded to social media of the former two-division champ, flexing in the gym with the caption: “The most power twitter’s ever seen,” blogger Matt Marenic wrote: “What are you using? I want some of that.”

In response to the remark, McGregor replied: “Proper Twelve and Forged Irish Stout. Served alongside my own, organically grown, Irish beef, served on a hot stone. Tidl spray for pain.”

McGregor has not been subjected to a drugs test by UFC’s partner USADA since the third quarter of last year. As part of the company’s anti-doping policy, implemented in 2015, every contracted fighter is subject to random drug tests all year round.

Since USADA was introduced, McGregor has been randomly drug tested 62 times and has never failed a test. The years he was most tested by USADA were 2016 and 2021, with 11 visits. Notorious was visited once in the third quarter of last year but has not produced a sample for USADA after that date.

Bloody Elbow recently reached out to the drug testers who confirmed  “that our Athlete test history is accurate” regarding their online records.

Former UFC flyweight champion, Henry Cejudo made reference to this in the replies to the video: “@TheNotoriousMMA hasn’t been tested by USADA in over a year…Meanwhile, I’m eligible to return next month baby! #C4.”

McGregor has been out of action since July 2021 with a broken left fibula and tibia. The leg injury was sustained in the first round of his UFC 264 contest against Dustin Poirier after unleashing a heavy kick to Poirier’s thigh.

Expectations are that McGregor will return to competition in autumn 2023 as confirmed by UFC president Dana White.

Speaking to The Sun, he said: “We’re looking at early fall if everything goes right.

“If his leg heals right and he gets the clearance to really start training, then possibly early fall. We’ll see when he’s ready to fight. And when the doctor gives him 100 per cent clearance, we’ll start looking at possible opponents.”