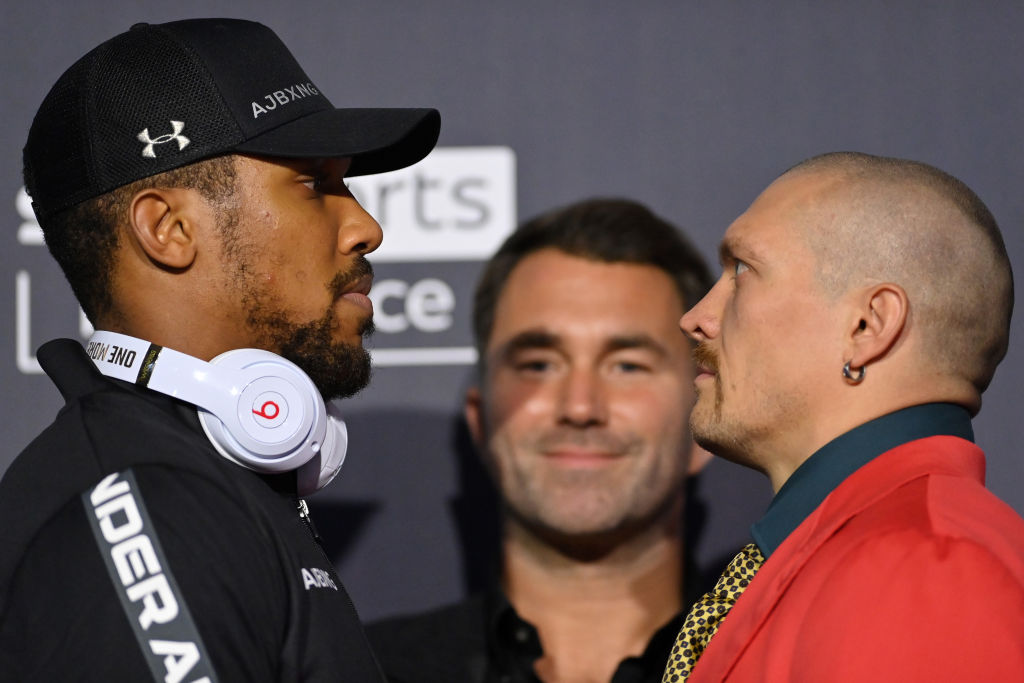 In his latest column with Metro.co.uk, the British boxing legend breaks down this weekend’s heavyweight title showdown and reflects on a magical night for Tommy Frank and Fightzone.

Oleksandr Usyk is definitely up there as one of the greats and could very well be Anthony Joshua’s toughest test to date. Usyk is a fantastic, skilful boxer but he is moving up in weight.

In his recent fights, Joshua has boxed a bit more cautiously, a bit more sensible. Defeats can make or break you and I think the defeat to Andy Ruiz Jr and how he responded in the rematch made AJ. He’s thinking about things a bit more now and he is reminding us of just how good a boxer he is and why he won that Olympic medal. And he will need that against Usyk.

I think Joshua will box a smart fight, he has to. I think he knows that Usyk can punch and he will know himself he can be vulnerable. I don’t think he is going to go in there and jump all over him. Having said that, Usyk can be a bit of a slower starter, he likes to let his opponent punch themselves out a bit, make them hit fresh air and then put his foot down like he did against Tony Bellew. I think Usyk will box cautiously because of the size of AJ. AJ will do likewise because he knows what Ruiz did to him. I can see a chess match.

In his first two fights since moving up to heavyweight, Usyk has put on that extra bit of weight and I think he has looked a little bit slower. I think AJ has slimmed down with that in mind, AJ has seen he has slowed down a touch he’s responded by trimming down to give himself that extra bit of speed. He’ll be thinking he can outbox him and he is well capable of doing that.

Can Usyk tire Joshua out?

AJ is in no way a slow heavyweight. Coming in a bit lighter and combining that with all his other great attributes, it causes Usyk loads of problems. Usyk has come in big because he is thinking he probably only needs to land the one punch. I think he will do what he usually does, start a big cagey and make his opponent miss, try wear out AJ and try land that big one coming down the home straight in the last few rounds.

That’s what he is so good at, he is a masterful boxer, he is extremely talented. I think Usyk’s gameplan will be to tire his opponent out by making them miss like he does in every fight and go for that one-punch finish when he senses Joshua’s vulnerability in the second half of the fight.

AJ will be determined to keep him at a distance and stay calm in there. It could be a bit of an anti-climax! They are both going to be so wary of each other. AJ is aware of his own vulnerabilities and Usyk will be aware of his own too once he sees this giant towering above him. It will be tight.

All guys with the frame Joshua has, the really big heavyweights, they can gas a little bit. They do get tired. Frank Bruno used to do that a bit, AJ has shown signs of tiring down the home stetch a bit in the past and I think with Usyk’s boxing ability he will try to expose that. His plan will be to make AJ miss over those first six rounds – AJ has got to make sure he has enough left in the tank for the last six.

Having said that, it is hard to go against AJ I still make him the slight favourite. I fancy AJ to win on points, a close points decision. He was in so many explosive fights and delivered so many explosive wins earlier in his career, I think we forgot how good a boxer he actually is, and he needed the Ruiz fight to remind us all of that.

But whatever the outcome is I don’t think it will surprise me. If Usyk outboxes AJ, if AJ outboxes Usyk or if either man gets the knockout I wouldn’t be surprised, I think all of those outcomes are a real possibility. It is that close a fight. But I just think AJ has it in him to outbox him, you don’t win what he has won both as an amateur and as a professional without having the ability to do that.

Campbell Hatton out to shine again

It is another big night on the big stage for Campbell on Saturday, when he looks to go 4-0 against Sonni Martinez. He’s still young and learning his trade but he’s fighting in front of 80,000 people, that is massive. It is a lot of pressure on him but it stands him in good stead going forward.

He’s done brilliant, this is becoming the norm for him despite only being three fights into his career. Once he gets up there, when it comes to headlining his own shows one day, he’ll be able to handle it no problem.

After the disappointment of his rematch against Rosendo Hugo Guarneros earlier this year, Tommy Frank bounced back in perfect fashion last week against Matt Windle. It was the amazing success story Tommy deserves that saw him claim the British flyweight title.

Windle gave it his all and it showed once again Fightzone are consistently delivering competitive, domestic fights. As far as Tommy is concerned, it’s not where you start, its where you end up and he must be so pound to be Sheffield’s first British flyweight champion and I’m sure there are more big nights to come.

Windle meanwhile didn’t damage his reputation one bit – he was fighting at a weight that wasn’t his natural weight. So if he moves down to light-flyweight I’m sure he will find himself chasing more titles again soon.

Kash Ali meanwhile got another good win on the same night, defending is IBF European belt as he continued to rebuild his reputation. He is now nicely moving up the ranks domestically.

In Britain, we have Joshua, Fury, Dillian Whyte, Joe Joyce and Daniel Dubois all in the top 10 in the world so it is a difficult task ahead of him in closing the gap to those lads. Perhaps he might want to be looking at a commonwealth or an international title as his next move to help get his world ranking up and get some vital experience.

It was good to see Dave Allen back on the Fightzone show too on punditry duty after his comeback with a few weeks back. Maybe that’s a fight that could be built up, Dave Allen vs Kash Ali. That to me is a good fight, especially if there’s a belt involved. Dave has never had a belt before and he’ll be desperate for one. It could be a great matchup down the line.

Visit www.fightzone.uk and join the revolution.