‘That’s a beautiful green shirt, do you have a green jacket?’: LIV Golf rebels Phil Mickelson and Brooks Koepka exchange savage ‘Masters’ and ‘World No. 1′ digs ahead of Saudi-backed series’ finale

LIV Golf rebels Phil Mickelson and Brooks Koepka could not help but take a dig at each other ahead of the Saudi-backed series’ finale this week.

Most of the war of words in golf over the past year has been between the LIV Golf defectors and the PGA loyalists.

However, Koepka and Mickelson exchanged a little verbal spat in a press conference ahead of the finale of the rebel series this week in Miami. 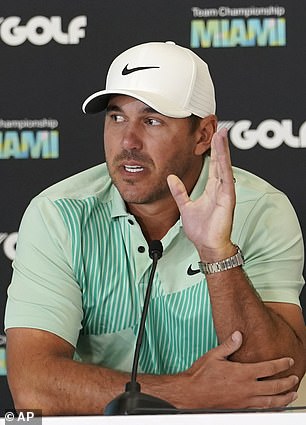 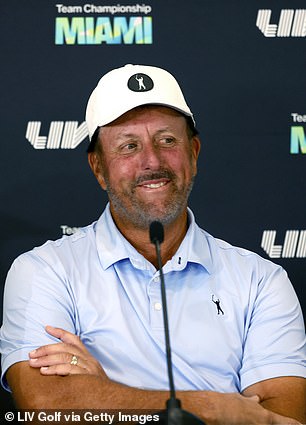 As LIV unveiled its team matchups for its final tournament of the year that begins Friday, the duo couldn’t help but take digs at each other.

This week’s format allowed the highest-seeded team, which happens to be captained by Koepka, to pick the team it wants to play.

Koepka was asked who he would be selecting as his opponent for the quarterfinal matchups, which will take place at Trump National Doral. 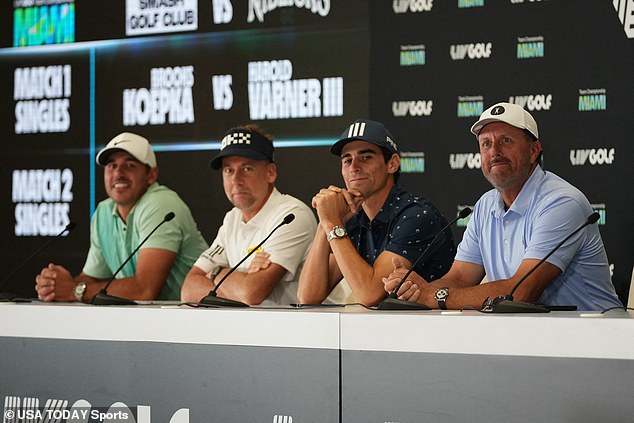 Mickelson then interjects with a ‘woah, woah, woah,’ before explaining that Koepka is allowed to pick an opponent from any seven of the teams that do not have a first-round bye.

The Lefty the followed up his explanation with a jab as he said that Koepka could pick him if he wanted a ‘rematch of the 2021 PGA’, which Mickelson pipped the 32-year-old to by two shots.

Koepka immediately hit back, saying: ‘If you wanna play we can play but, I don’t know if you know this cause you’ve never been No. 1 in the world but if you finish at the end of the year they give you a little trophy so I got two of those, I’ll bring one to show you. 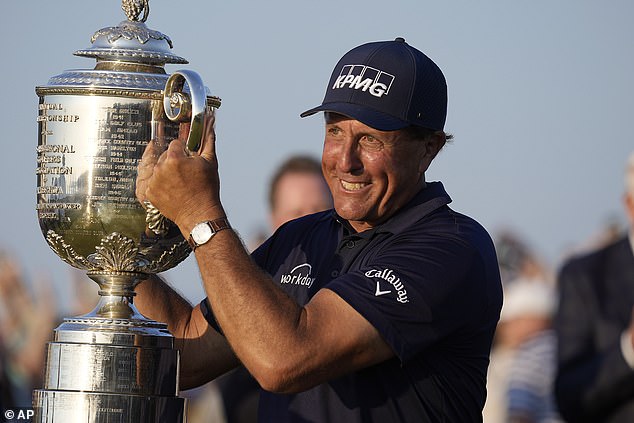 The Lefty won the US PGA Championship in 2021, pipping Koepka to the win by two shots

However, Mickelson had a retort locked and loaded as he took a dig at Koepka’s lack of a Masters win, responding: ‘That’s a beautiful green shirt, do you have a green jacket?’

‘I do not, but I will don’t worry,’ Koepka defiantly insisted.

However, Koepka and Mickelson will not face off in a ‘2021 rematch’ as the Lefty’s  team will instead face the team led by World No. 3 and reigning British Open and Players winner Cam Smith. 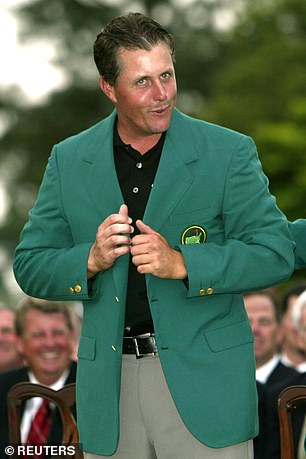 Mickelson counts three Masters victories among his six Major wins, while Koepka’s four majors came at the U.S. Open and PGA Championship, both of which he won twice.

Meanwhile, the 52-year-old has only ever reached as high as World No. 2, while Koepka topped the rankings back in 2018.

Trying to replicate the excitement generated by hugely popular team competitions such as the Ryder and Presidents Cups, LIV Golf incorporated a team component into all eight events.

While innovative, the concept and an unfamiliar format has yet to establish itself.

Mickelson, once an anchor of U.S. Ryder Cup squads, candidly described the LIV team event as a fun competition.

‘There’s some elements of those team events that can apply, that knowledge and experience can help, and there’s some that simply don’t,’ said Mickelson, who captains the HyFlyers team and will take on Punch GC captain Smith in Friday’s quarter-finals.

‘We don’t have anybody sitting out, and we don’t have the rich history and probably the pressure that those other events have, whereas this is really a fun event. Like we’re having a blast.’