A topsy-turvy start followed by a finish of considerable quality. In many ways, Rory McIlroy’s stunning third round in Dubai mimicked his wider stay at a tournament that is suddenly offering him the prospect of two big victories in one day.

For much of the opening two rounds, the world No 1’s form indicated he would not only fall short in his challenge to win the DP World Tour Championship here in Dubai, but that he might also surrender his position at the top of the order of merit in the very last event of the season.

With a brilliant lap of 65 around the Earth Course, taking him to 12 under par, normality seems to be taking over. 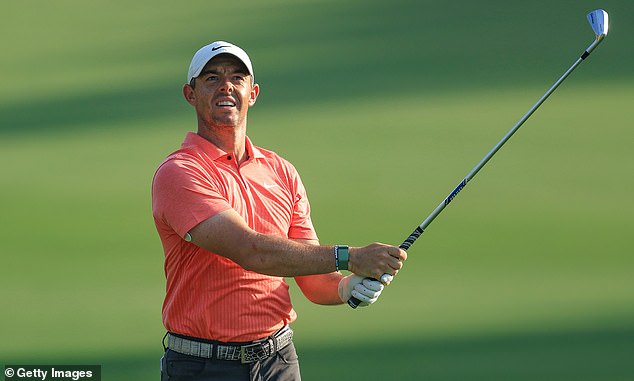 Despite a difficult first two rounds in Dubai, Rory McIlroy has bounced back with a round of 65

His prospects of winning the tournament outright remain hard to call, not least because of a high-calibre leaderboard that is topped by Jon Rahm at 15 under, but a 36-hole deficit of seven strokes is now a disadvantage of only three.

By jumping from 11th to a tie for fourth, the Northern Irishman has also largely reeled in Matt Fitzpatrick, who has emerged as his main threat in the season-long rankings. To simplify the complex mathematics, Fitzpatrick, at 14 under after carding 70, would take the Harry Vardon Trophy if he wins here and McIlroy is outside the top two, and likewise if he is second and McIlroy is beyond the top seven.

For a time across Thursday and Friday, the stars were aligning perfectly for the US Open champion, but McIlroy isn’t the sort of opponent you want to seeing growing in size in the rear-view mirror.

‘It’s great to put myself in a position to not only win the DP World Tour rankings but the tournament as well,’ said McIlroy, who is attempting to become only the second player to win the Tour Championships of both the PGA Tour and European circuit in the same season.

‘It’s really cool. After more than 15 years as a pro I’m still trying to do things for the first time. I’ve never won the FedExCup and this in the same year, so it would be really nice. 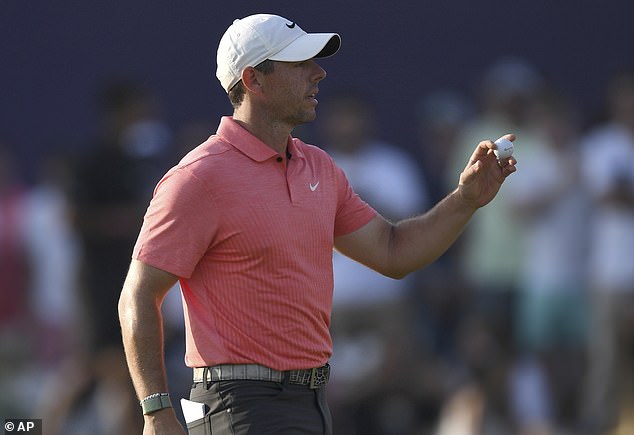 ‘I’ve played some really great golf. If I’m able to go out there and get the job done, it would be a really nice way to end a great year.’

With tighter driving than he showed in the first two rounds, McIlroy did a better job of avoiding this course’s dense rough and added seven birdies to an early eagle. But it was slow going initially, with that eagle at three sandwiched by a pair of bogeys. His recovery saw him go through the next 15 in seven under, illuminated by fairway approach shots at eight and nine that rested within a foot of the pin.

Rahm, the world No 5, is looking ominously strong after matching McIlroy’s 65, but the second-round leading pair of Fitzpatrick and Tyrrell Hatton had a mixed day. Fitzpatrick was too often out of position off the tee and signed for two under, while Hatton reached 15 under with three early birdies before dropping shots on four of six holes after the turn. He finished with a birdie for 72, leaving him 12 under and tied for fourth with McIlroy, with Alex Noren third and a stroke better off.

Fitzpatrick, a two-time winner of this tournament but yet to finish top of the seasonal rankings, said: ‘I’m going to need a lot of things go my way. Potentially, with what happens tomorrow, this could be a third win here, and all three times I’ve not won The Race to Dubai.’ 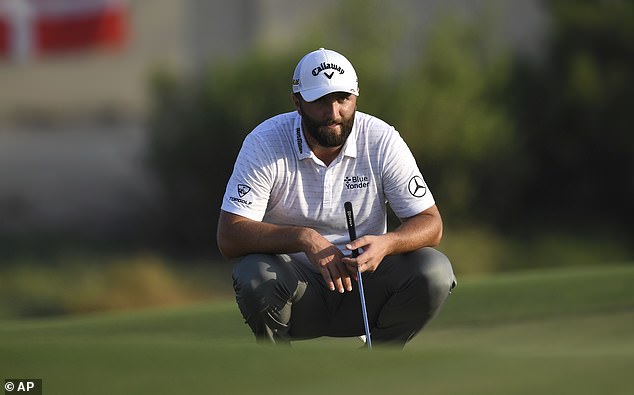