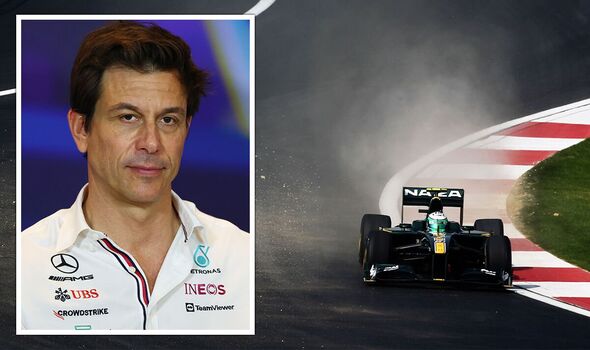 Toto Wolff is one of several team bosses to have reservations about increasing the number of entrants in F1 as Andretti look to join as an 11th team. Wolff says there are fears the new entry could dilute the sport and wouldn’t help increase the value of F1.

His reservations have some merit after F1’s disastrous attempt to expand the grid over a decade ago. The move came about after FIA President Max Mosely aimed to push through a $40million budget cap tier.

In an attempt to draw in newcomers, teams who operated under this cap would be allowed extra technical freedoms. The new teams would also be unable to access F1’s major commercial rights prize pot.

Constructors were only able to enter ‘Column 1’ – where teams are paid the higher rewards – until they finished inside the top 10 for two seasons. The FIA hoped that the new squads would be on their side during political disputes due to the low entry costs.

However, the budget formula never materialised despite 15 applications from teams across the world. The three chosen constructors – Manor, Lotus and Camps Racing – were successful but then faced increased costs and struggled on track.

The teams were miles behind the rest of the field at the opening race in Bahrain and failed to make progress throughout their time in the sport. Manor (now nicknamed Virgin Racing) designed a car which looked unable to complete a race due to a small fuel tank.

Lucas di Grassi and Timo Glock finished just three races between them over six Grand Prix weekends. Hispania ran out of money ahead of the opening race and qualified over three seconds slower than the nearest new team at the opening race.

The team folded after the 2012 season having never scored a single point in F1. Lotus were more successful, breaking into the top 10 in 2010 and 2011 to cement themselves in the FIA’s main prize pool at the end of the season.

However, the team was beaten by Marussia in 2012 and slowly ran out of money before closing their doors ahead of 2014. Of the three squads that entered in 2010, only Marussia scored points on two occasions.

Jules Bianchi picked up P9 at the 2014 Monaco Grand Prix while the same team, renamed Manor, picked up one point in their final season in 2016. Manor had hoped to continue into 2017 but was placed into administration at the start of January.

Andretti announced a partnership with Cadillac last week in the hope of securing entry before 2026. The move appears to be supported by FIA President Mohammed ben Sulayem who has called on constructors to accept new teams.

However, Wolff stressed the American team would need to prove themselves and make a case as to why they would increase interest in the sport. He explained: “Andretti is a great name, they have done exceptional things in the US but this is sport and this is business.”

“We need to understand what it is you can provide to the sport and if an OEM or multi-national group joins Formula One and can demonstrate they are going to spend X amount of dollars in activating, in marketing, and in various markets, that is obviously a totally different value proposition for all the other teams.”