The Bahrain Formula One Grand Prix will go ahead on March 22 without fans due to the coronavirus crisis.

Bahrain, which is hosting the second round of the Formula One season at the Sakhir circuit outside Manama, has reported 83 cases of the virus, mostly linked to people who had travelled to Iran. 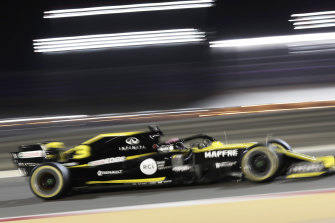 The Bahrain Grand Prix will be closed to spectators.Credit:AP

"Bahrain has made the decision to hold this year's [race] as a participants-only event," organisers said on Sunday.

"Convening a major sporting event, which is open to the public and allows thousands of international travellers and local fans to interact in close proximity would not be the right thing to do at the present time," they added.

"To ensure that neither the sport, nor its global supporter base, is unduly impacted, the race weekend itself will still go ahead as a televised event."

Bahrain is the second F1 race casualty of the virus. The Chinese Grand Prix in Shanghai scheduled for April 19 has already been postponed.

Bahrain has suspended flights to some destinations over concerns of the rapidly spreading virus. It has also asked people entering the country who have recently visited Italy, South Korea, Egypt and Lebanon to isolate themselves for two weeks.

Maranello, Italy, the home of the Ferrari team, is within the affected area.

But both Ferrari and Red Bull-owned AlphaTauri, who are based in Faenza, will still race in Bahrain because they will be coming from the Australian Grand Prix, which hosts the opening race in Melbourne next weekend.

"Depending on where they flew through on the way from Melbourne, there is a process that you go through," the circuit spokesman said of the Italian teams.