Some staff from Ferrari, one of the teams at the heart of the grand prix panic caused by the worldwide coronavirus outbreak, are already at Albert Park preparing for next weekend's Australian Grand Prix while the bulk of the Italian-based squad is expected to arrive in Melbourne on Saturday and Sunday.

The handful who are here already arrived in Australia before the federal government on Thursday night imposed travel restrictions for people coming into Australia from Italy, where more than 100 people have already died from the virus and thousands more have been diagnosed with it.

And the famous scarlet cars, which occupy such a storied niche in the history of the motor sport, are due to land in Victoria on Sunday night before being shipped to the pit lane on Monday. 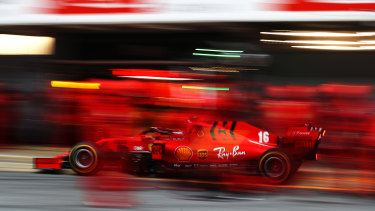 The race crews and drivers who will be competing next weekend have travelled from pre-season testing sessions at Barcelona but most of the personnel who will be on duty in Melbourne will travel from Italy.

Ferrari, rival race team Alpha Tauri and the tyre manufacturer Pirelli, who supply race tyres, are all based in Italy and their involvement in this year's Australian Grand Prix has been the subject of massive scrutiny over the past week as the coronavirus epidemic has escalated.

Australian GP chief Andrew Westacott has been liaising with Formula One Management and health authorities for much of the past two weeks as race organisers and the state and federal governments all looked to find ways to contain the illness and ensure the grand prix goes ahead next week.

Westacott says that the Italian-based teams had already taken measures to limit the spread of the coronavirus to their staff and minimise the risk of bringing it to Melbourne even before they left their own country.

“They have recognised there is the need to be responsible for their own business operations,’’ Westacott said.

“It comes to exactly the same thing AFL teams do. If two or three of the guys go down with a bug, they ring up the club doctor and the doctor says don’t come in for a couple of days.

''They are excluded from coming to training so they don’t infect the rest of the footy team. The Italian teams and indeed all teams have adopted that same mentality and approach to risk mitigation and management of the health of their own personnel.

“Given the sophistication that exists in the world of Formula One and we are talking about teams and drivers and operations from the UK, Spain, Germany, France and Italy, they will adopt an approach that addresses these sorts of considerations. I have no doubt about that.''

Under measures announced by the Morrison government this week travellers arriving from Italy will be temperature-screened, and if they have elevated temperatures they will be tested for coronavirus.