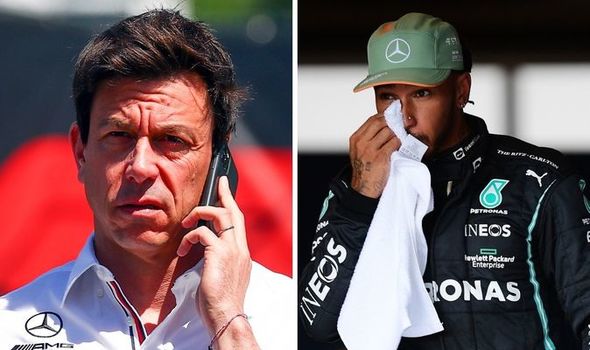 Mercedes team principal Toto Wolff has said he and Lewis Hamilton both need to “get over” Max Verstappen winning the United States Grand Prix – although it won’t take too long. Mercedes have been notoriously successful in Austin, winning five of the previous six races between 2014 and 2019.

Red Bull have closed the gap this year though and came into the weekend quietly confident of breaking Mercedes’ dominance.

Verstappen gave himself the best opportunity by clinching pole on Saturday, but Hamilton was quicker off the grid in the race, taking first place after the first corner.

Both Hamilton and Verstappen were running on mediums and it appeared as though the Red Bull was coping better on the compound.

Hamilton was struggling to break away from his championship rival before Verstappen pitted early for his first set of hard tyres.

That caught Mercedes by surprise, forcing Hamilton to stay out longer and try a different strategy.

And it looked as though it was going to play into the hands of Hamilton as he came in for his second set of hards with fresher tyres going into the final few laps.

The seven-time world champion was quickly gaining on Verstappen, getting within two seconds and lapping at a faster rate.

But graining issues and dirty air made it difficult for Hamilton to get within DRS range with Verstappen doing enough to keep hold of first place and grab his first win in Austin.

For Mercedes, they now have to find a way to claw back some of the gap in Mexico next month.

They have two weeks to prepare and Wolff accepts that the team will need to “get over it”.

However, he goes on to admit that it won’t take any longer than half-and-hour to move on.

“We have to both get over it and that’s gonna take 30 minutes.

“The car was just not quick enough on the mediums.”

Wolff also spoke on Red Bull’s decision to bring Verstappen in early, which reminded him of what Mercedes did back in Bahrain.

“They went for a super aggressive first stop. That was bold, we did that in Bahrain,” he added.

“They then covered it in the second stint and we thought that was enough to get them but they deserved to win today.”