Still exhilarated by the most incendiary finale in Formula One history, Christian Horner has little time for the idea that Lewis Hamilton was denied an eighth world title by some act of grand larceny. Never mind being “robbed” in Abu Dhabi, as Toto Wolff’s wife Susie has alleged, Red Bull’s team principal argues Mercedes were merely outsmarted by superior strategy and by Max Verstappen’s peerless opportunism during a chaotic final-lap shootout. “We’ve done nothing wrong,” he says, emphatically. “We won the race on the track.”

In this, Horner’s first newspaper interview since the astounding events at Yas Marina, his emotions continue to run haywire. On the one hand, he is euphoric at Verstappen’s achievement in usurping the greatest driver of this generation, and at Red Bull’s denting of Mercedes’ remorseless dominance. But on the other, he is irked by the apparent gracelessness of his rivals’ reaction. Rather than deciding that all is fair in love and war, the Silver Arrows have pursued almost every legal avenue to invalidate the Dutchman’s triumph. 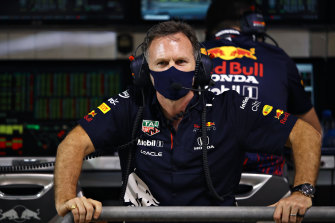 They even turned up for the duel in the desert with a QC, Paul Harris, a specialist in litigation who had extricated Manchester City from their Champions League ban. So much for the post-race pleasantries. As he emerged from the victory presentation soaked with champagne, Horner grinned that he would seek out Wolff, his pantomime nemesis, to bury the hatchet. But when he arrived at the hospitality suite, he was told the Austrian was unavailable. It turned out that Mercedes had already enlisted Harris to prosecute two protests that would take four hours to resolve.

“We were summoned to the stewards’ hearing and confronted with a barrister I had last seen dealing with a tyre issue that they had back in 2013,” Horner explains. “Suddenly you’re in the thick of it.” Mercedes’s move to “lawyer up” for Abu Dhabi arose from a sense that a titanic season-long battle was always likely to be decided by an almighty ruck. But Horner scorns it as an adversarial tactic to spook the stewards.

“The stewards in the room, they weren’t professional lawyers. Is it fair then to be faced with a QC? That can be quite intimidating. He’s not an operational member of the team, he’s not a sporting director. This is an issue that needs to be considered by the FIA. We don’t want to be taking lawyers, let alone barristers, racing.”

Eventually, the merit of Mercedes’ complaints was rejected. A controversial ruling by race director Michael Masi, ordering the cars between Hamilton and Verstappen to unlap themselves behind a safety car deployed after Nicolas Latifi’s late crash, was upheld. But as he looks back at an unforgettable night, Horner cannot help but feel aggrieved at how the fallout from Verstappen’s finest hour has become so toxic. While Ola Kallenius, the head of Daimler, was quick to congratulate him in the fraught aftermath, the same could not be said of anyone else at Mercedes.

“I did find it disappointing that there wasn’t a single member of the Mercedes team below the podium,” Horner says. “And it’s a shame that they’ve taken it in the manner they have. They have been a winning machine for eight years now, and at some point that has to come to an end.”

Amid all the hue and cry about Hamilton being left at the mercy of a flying Verstappen on the last lap, there is one intriguing hypothetical. Would the same outrage have ensued if Hamilton, chasing F1 immortality, had profited from the same situation? Horner smiles wryly, answering the question with one of his own. “You have to ask yourself, what would have happened if it had been the other way round – would Lewis be the hero or the villain?”

Luck, in Horner’s view, has a habit of evening itself. For all the howls of indignation about Hamilton’s fate, Horner documents how Verstappen had suffered his fair share of misfortune en route to the final showdown. Take the moment when he suffered a tyre blowout on the main straight in Baku at over 200 miles per hour. Or the tangle with Hamilton that propelled him into the Silverstone barriers with a force of 51G. Or the first-corner melee in Budapest where he found himself skittled “like a bowling pin” by Valtteri Bottas.

The memory of Silverstone, in particular, casts a long shadow. Verstappen struggled to forgive Hamilton for his wild celebrations, given he was still being checked over in hospital after the crash. “It was a massive, massive impact,” Horner reflects. “It was only at 11.30 in the evening that the doctors released him, after they had conducted all the tests. He had seen his championship lead obliterated and been taken out of the race. The stewards had found Lewis at fault. But there Lewis was, having scored 25 points.”

Against this backdrop, Verstappen’s snatching of the title on the last lap of the last grand prix brings a satisfaction within Red Bull that justice has been done. Agonising over Hamilton’s near-miss, Horner believes, misses the wider picture. “You can’t examine incidents in isolation,” he says. “So many decisions had gone against us. Even at the beginning of the race in Abu Dhabi, no penalty was given to Hamilton for cutting the chicane. Lots of people have said that Lewis was a sitting duck in Abu Dhabi. But tactically, Mercedes made an error. They had the choice to pit, they chose not to, and they left him in that situation.”

Seizing their moment, Red Bull brought Verstappen in for the fresh soft tyres that detonated his dash for glory. “Naturally, we’re going to roll the dice and go for it,” Horner says. “Max just refused to give up. You didn’t hear him moaning on the radio. Every lap, he drove his heart out, then suddenly a chance presented itself. When you look at his pass at turn five, I don’t think Lewis was expecting him to go through there. He didn’t even defend. Max took him by surprise. Classic Verstappen.”

Horner does not have a second’s hesitation in highlighting Verstappen’s worthiness as champion. He reels off the numbers that attest to his astonishing year: the 10 pole positions, the record feat in finishing first or second in 18 races, the fact he led 652 laps, more than twice those of Hamilton. “Even entering that weekend, I felt Max deserved it for how he had driven, how he had applied himself, how he had kept fighting under the most intense pressure and scrutiny – even when he didn’t have, in the second half of the year, the best car.”

Mercedes issued an uncompromising statement last week, claiming that the scenes in Abu Dhabi had caused them to second-guess their faith in racing and calling on the FIA to “improve the robustness of rules and decision-making in F1”. Horner, though, says: “It’s an exaggeration. Latifi, I’m sure, didn’t intend to crash. It was just an accident. The marshals did a great job of recovering the car in time, and Michael opted to get the race going again. It’s unfair, the abuse he has received. One side is always going to be unhappy.”

Unhappy? Mercedes were so incensed that Wolff did not even appear in Paris for the FIA’s prize-giving gala, despite leading his team to an eighth consecutive constructors’ crown. Horner, plainly, found the snub churlish.

As the acrimony rumbles on, one suggestion by Mercedes is that the exchanges between team principals and race control should no longer be for public consumption. Wolff came across badly from such audio in Abu Dhabi, being heard lobbying Masi as early as lap 37, long before the safety-car period.

But Horner is adamant this innovation should stay. “I fought very hard to get these messages broadcast. It makes you think twice about hitting the button, because you know it’s going live. It surprised everybody, the amount of lobbying that was going on – particularly from some quarters.”

For now, any more squabbling with Mercedes can wait. Horner plans a break with his family, acknowledging, after the most ferocious tussle of which he has ever been part: “I owe them time that is uninterrupted by F1.”

Verstappen, too, is only just coming to terms with the magnitude of what he has achieved. “It was very emotional when he came back to the factory. It really hit him, how much he means to all of the staff, how much pride and passion there is among all the people who design and produce these cars. It was the closest I saw to him being overwhelmed by it all,” Horner says.

One day, the rancour will subside. One day, Verstappen’s body of work in 2021 will command a high place in his sport’s canon. Against opponents who had annihilated everybody for seven years, winning more than three quarters of the races, he has somehow conjured a way to prevail. “Max has driven with such determination and spirit,” Horner says. “He just wasn’t going to roll over and let this go. It’s a life lesson: that if you keep striving for something, anything is achievable.”