Footy is tying itself into an ever more constrictive knot. The more authorities try to undo it, the tighter it gets.

Footy calls and celebrates itself as a collision sport. Implicit in that is the likelihood of casualties. But when a footy collision leads to a casualty, it is assessed like a car accident, not meant to happen and preventable next time. 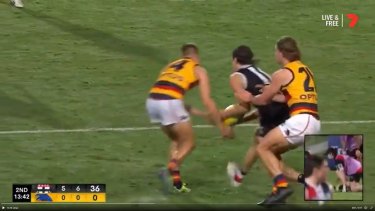 It’s born of good intentions, clumsily realised. As awareness of concussion and related long-term injuries has grown, the premium on protection of the head has risen, steeply. The first shift, to outlaw and punish blatant attacks, was easy. Injuncting recklessness followed naturally. It was moving with society anyway.

Then the margin for error thinned. Earlier this season, in a borderline case, Geelong’s Patrick Dangerfield could have pleaded that he had no choice in his late shirtfront of Adelaide’s Jake Kelly because he was already committed to the action, but did not. He accepted three matches.

Later, Carlton’s Lachie Plowman did try to overturn a two-match suspension for fractionally late and arguably unavoidable contact with Hawthorn’s Jaeger O’Meara. He failed. In each case, it was down to a slither of time. That seemed to be the line.

But Adelaide Crow David Mackay’s summons to the tribunal for his head-on meeting with St Kilda’s Hunter Clark looks to be a test case for a new threshold. 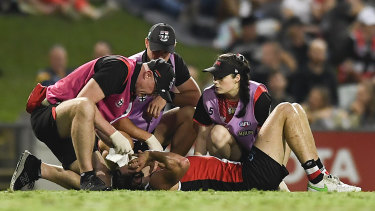 To most eyes, Mackay and Clark went from opposite directions with equal ferocity at the ball. They were peripherally aware of one another. Mackay wasn’t late. He got his hands on the ball just as Clark did.

It was inevitable that their bodies would collide, and not the exclusive fault of either player. As it happened, the body parts were Mackay’s shoulder and Clark’s jaw. It was an accident, of a kind that but for the grace of God could happen a dozen or 20 times every game. 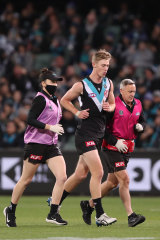 But accidents don’t happen. They mustn’t. They can’t. So Mackay is charged with rough conduct that is “unreasonable in the circumstances”.

In Adelaide two nights previously, Geelong’s Lachie Henderson caught Port Adelaide’s Todd Marshall on the jaw as he reached up either to mark or shield a teammate, concussing the Port player and putting him out of the game. The umpire on the spot paid a free kick against Henderson for a block, which implies either a degree of intent or carelessness. It looked to be wrong.

Two nights later, no free kick was paid against Mackay, yet he now finds himself fronting the tribunal on a grave charge. Was the umpire also wrong? This is not to scapegoat umpires. They are being asked to administer an impossible on-field regime. But it is instructive that in neither incident did teammates of the fallen player remonstrate.

David King argues strongly and consistently for tougher penalties in the event of head injuries. He says you can never be too vigilant. As a 240-game dual premiership player, his view demands respect. He’s been out there.

But it poses this question: in the long term, what do we want? In its new framework, the game already has evolved new de facto safety protocols. When attacking the loose footy now, players are aware of the three-fold risk, injury to themselves, injury to their opponent, sanction.

Some do hesitate now, in a way not seen before, a way that would have attracted ridicule in King’s heyday. You see it every week. It is stopping incidents happening, and more power to it. But it’s not going to stop accidents happening. 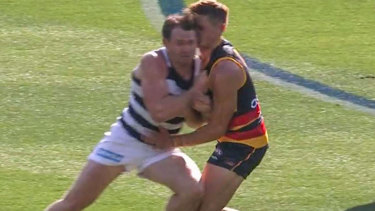 Geelong’s Patrick Dangerfield was banned for this bump on Adelaide’s Jake Kelly.

So where do we want it to stop? It’s not a rhetorical question. Spectators mostly would leave well alone. Part of the appeal of a collision sport is the collisions and the courage that spins out of them. But spectators are at a safe distance.

Players might also leave well alone. They also relish the contact and say they understand the risks. But do they? Sometimes it feels like we’re only at the beginning of our understanding.

It’s a question that’s vexing other codes. Peter V’landys has won rave reviews for his leadership of the NRL, but his crackdown this year on head-high hits does not sit well with diehards on either side of the fence.

The thing is that part of what makes contact sports dangerous is also what makes them appealing.

So the question is how urgently and fundamentally do we want to engineer change? Is it to the point of eliminating collision injuries altogether?

It’s possible to minimise head injuries. It’s the path we’re on. But to eliminate them completely would mean either the banning of accidents, which is impossible, or the prohibition of all but the most incidental contact, which would mean that footy is no longer footy.

It’s going to be an interesting tribunal hearing.