AFL boss Gillon McLachlan has defended the league continuing its lucrative partnership with betting agency BetEasy, saying the AFL had to balance social responsibilities with financial requirements that were necessary to keep the game affordable.

The AFL signed a five-year deal with BetEasy with revised conditions over summer, while McLachlan did not accept that it was valid to draw a link between their wagering relationship and the suspension of Mapgie Jaidyn Stephenson for betting on Collingwood matches last year. 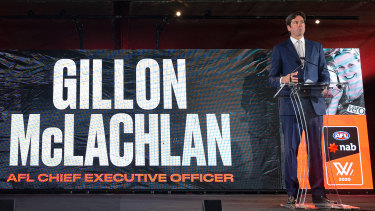 Anti-gambling lobbyists have charged the AFL with hypocrisy over the tough stance on players, while the league takes wagering dollars from companies in return for advertising.

McLachlan said the AFL had taken "a holistic look'' at the wagering and made changes, such as reducing (gambling) signage by 20 percent at Marvel Stadium and the MCG, noting that there were no live odds during broadcasts or in quarter breaks at games.

"We're trying to find a balance between protecting the integrity of the game…partnering with companies that are legal, to grow and invest in the game, so we can hold prices and invest in community football, with managing the social expectations of our supporters.

"And they are balances that are living, breathing things you're trying to make judgements on, judgements at various points in time.''

But McLachlan rejected the suggestion that the AFL was hypocritical for taking a tough line on Stephenson (who was suspended for 10 matches last year, plus 12 weeks of suspended sentence) and continuing to accept wagering dollars.

"That's as analogous as saying because someone, because you serve alcohol are your function, you're supporting drink driving. People know that players could not be better educated about wagering in games that they play in. And those gambling code of conduct are totally known, totally transparent and I think entirely separate from actually the fact that wagering happens on our game and there is advertising at venues to support it.

"They are distinct and I think conflating them is unfair.''

In a wide-ranging interview with The Age, McLachlan also:

*Said he did not have a timeline for when he would finish as chief executive of the AFL. "I don't have one. I'm enjoying what we're doing. I think we're going okay. I'm pretty excited about this year.''

*Would not discuss how the AFL would deal with the critical next broadcast rights deal, or whether it was feasible for tech giants from the United States to be broadcasters.

*Would not elaborate on how he viewed St Kilda's financial performance – the Saints having received the third most of any club (more than $20m for the third year in succession) – except to say:
"I think that they've made a lot of progress the last couple of years. I know that they want to continue to grow their revenue. I know they want to grow it as well as we want them to grow it.''

Asked if disappointed if the Saints were in the same position, with over $20m from the AFL distribution again next year, he said: "We're working with all our clubs.''

*Revealed that the AFL would seriously consider holding Marsh series pre-season games in bushfire-affected towns in 2021.

"You look to what's possible as far as for next year, there's a really strong possibility we can do some good stuff with that.'' Asked if this was being seriously considered, he said "100 percent.''

*Predicted that the Greater Western Sydney Giants would win this year's flag and that this shaped as the most even season yet.

"Somehow, I reckon they're going to come out and this year's their year … they haven't got any injuries.

"I've never felt more confident of an even competition coming into the season.''