Wallabies and Brumbies centre Len Ikitau has put pen to paper on a new deal that keeps him in Australian rugby until the end of 2023.

After being included in last year’s Wallabies squad despite having fewer than 80 minutes of Super Rugby experience, the powerful centre has featured in seven Tests in 2021.

Ikitau scored two tries in Saturday’s 30-17 victory over the Springboks, and is forging a strong midfield combination with Samu Kerevi.

The 22-year-old Ikitau is highly rated by coach Dave Rennie, and this two-year contract is a clear sign that he could feature heavily for the Wallabies in the build-up to the 2023 Rugby World Cup in France.

It is understood Ikitau signed his latest deal before his impressive performance against the Springboks at the weekend.

“We’re thrilled for Len and his family that he’s committed to Australian rugby until the end of 2023,” Rennie said in a statement.

“He’s a great young talent and a humble young man who’s learning quickly what it takes to be successful at this level. He’s got a really mature attitude about improving every day, and that’s something that’s exciting for both Wallabies and Brumbies supporters moving forward.” 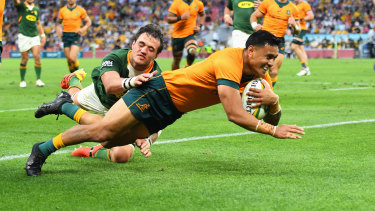 Len Ikitau scores a try against the Springboks on Saturday. Credit:Getty

Ikitau is a Brisbane product who rose through the Brumbies’ pathway ranks before debuting in Super Rugby in 2019.

“I’m stoked to be able to secure my future with the Brumbies and Rugby Australia for at least the next two years,” Ikitau said.

“I’d like to thank everyone who has helped me get to this stage of my career. It’s been a really rewarding journey so far. I know I have plenty of improvement left in me, and Canberra is the best place for me to continue to develop my game and learn what it takes to be a professional, season after season.”

Ikitau, who debuted against France at AAMI Park in July, is likely to start again for the Wallabies this Saturday against Argentina in Australia’s penultimate Rugby Championship match.

The Wallabies, who drew both Tests against the Pumas in 2020, now face the South Americans in back-to-back fixtures.

Stan Sport is the only place to watch every match of The Rugby Championship continuing this Saturday with the All Blacks v South Africa followed by the Wallabies v Argentina – both matches streaming live, extended and ad-free on Stan Sport from 4:45pm AEST.