Geelong coach Chris Scott has defended Joel Selwood after the Cats skipper was widely criticised for two incidents from his side’s win over the Western Bulldogs that resulted in fines.

Selwood was fined $1000 for punching Bailey Dale in the head while he was on the ground and then given a $2000 fine for what Scott deccribed as an accidental stomp on Taylor Duryea’s leg in a marking contest. 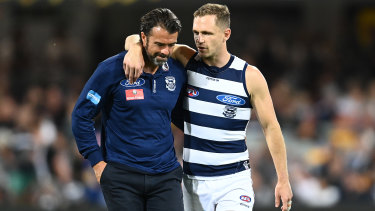 Fans on social media, ex-players and media alike criticised Selwood for his actions, but Scott was on the front foot when asked about what happened when speaking to reporters on Tuesday.

“Humans in general, but footy players, even good ones, captains [and] legends of the game, make mistakes and they should put their hand up for that. Which is what Joel did, in particular with one of those incidents.

“But the second one where he accidentally stood on someone, it was a genuine mistake. And I think it is actually incumbent on people in the footy industry to treat Joel Selwood with a level of respect whereby when he says something they believe him.”

“He handles it [criticism] like the ultimate pro. It won’t have any bearing on him at all,” Scott said.

“The broader issue over the long term, if people are saying with a straight face that that tarnishes his reputation, I think that reflects more on them than it does on him.”

The Cats coach also said he was comfortable with the AFL tribunal decision to clear David Mackay for his collision with St Kilda’s Hunter Clark. The case was seen as potentially a landmark ruling for the tribunal if Mackay had been found guilty.

“I thought the debate for the game was positive rather than negative … I don’t think it necessarily answered the debate one way or the other, but it is clear it is one we need to keep having,” Scott said.

“At least no one can accuse us of not being thorough.”

The Cats head to the Gabba on Thursday to play Brisbane in a preliminary final re-match. The Cats comprehensively beat the Lions on their home deck to make the 2020 grand final, and also beat Brisbane in Geelong earlier this season thanks to a controversial umpiring decision.

Scott said Tom Hawkins was fine despite a neck injury scare on Friday and that Gryan Miers was in their best 22 and would return from injury this week or next.

“We like the ground, we like the environment, albeit with a bit of trepidation because of the quality of the opposition,” Scott said of the match.

“I think the two clubs are developing a healthy rivalry. I emphasise the word healthy … I wouldn’t describe it as spiteful personally, that wasn’t my takeaway from that game. But I can understrand how other people might have that view.”