I’ve been quite vocal about how I thought Adam Reynolds should never have left the Rabbitohs, but from what I’ve seen he is a better player this year than last season.

The move to the Broncos has really freshened him up. It can happen with players. He looks like he’s got a little bit of extra responsibility in Brisbane, a few new surroundings and new players … it’s all adding up to him elevating his game beyond 2021, when the Rabbitohs made the grand final.

I’ve been watching him closely and he is playing on the ball a lot more than he did at Souths, where he had to share playmaking duties with Cody Walker. He’s almost on the ball nearly every play. That’s rare for teams these days because usually the lock does a lot of the first receiving.

But the thing I’ve been most impressed with: he’s just playing so tough. Add that to the fact he’s making the players around him better, and I think it’s easy to see why the Broncos moved mountains to get him.

Lachlan Ilias, the 21-year-old the Rabbitohs put their faith in when letting Reynolds go, has blown me away this year.

I didn’t know much about Lachlan before the comp started. I was impressed with him the first couple of games, but every game I watch him he improves. 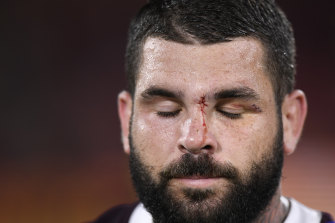 The thing that is really surprising is he’s such a big body for a No.7. I didn’t realise how big he was, and you can see that in the way he defends.

Just watch the way he goes to the line in attack. Ideally, you want your chest and shoulders to be facing down the field. When you face sideways you’re dragging defenders onto your outside players. But because he plays so straight it holds the defenders and creates room for the guys on the outside.

I think Ilias is a future rep player. I don’t think he’ll go past Nathan Cleary, but I can’t wait to see him going at Cleary and Mitchell Moses for the next six to eight years.

The Rabbitohs have the best back row in the NRL; they all just complement each other. 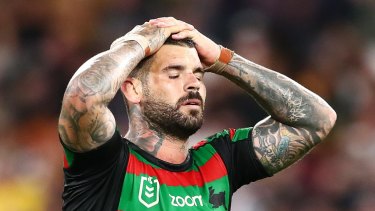 Cameron Murray is an out-and-out freak and without doubt I think he’ll captain Australia one day. Keaon Koloamatangi understands his game a lot better. He’s running the right angles and he looks really fit this year. And you know what you’re going to get with Jai Arrow. When those three are playing together they’ll be so hard to beat.

Gorden Tallis always used to say to me, ‘forwards win big games and backs decide by how much’. I think it’s advantage Souths, then.

Having said that, I’ve been really impressed with Brisbane this year. Herbie Farnworth has taken his game to a whole new level while Pat Carrigan, Tom Flegler and Rhys Kennedy give them size through the middle.

In the next year or two if they can find a world-class No.6 and find stability at dummy-half, and then possibly recruit a fullback, they’re a top-four team and even a premiership threat. Cameron Munster? If they can snare him, then look out.

But I think the big plus for the Rabbitohs will be the speed of Damien Cook from dummy-half; he can really feed off that dominance in the middle of the field. This game will be pretty close for 60 minutes, but I think Souths will come over the top of them.

Parra-Penrith shapes as a classic

I think the battle of the west could be the game of the year so far.

I thought Parramatta were embarrassed last week in Darwin and they just looked off the pace. There’s been excuses, though. They’re missing a lot of outside backs, which is why Dylan Brown has been playing centre before moving back to the No.6 this week. 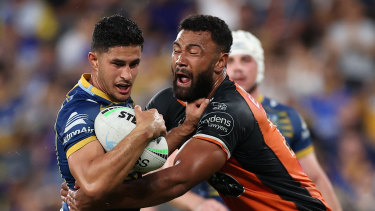 Dylan Brown will return to five-eighth for the Eels.Credit:Getty

The standout for Parramatta has been the emergence of Will Penisini. He’s a player of huge potential, and went to school with Joseph Suaalii.

I just can’t see Penrith getting beat at home. What is it, 21 straight wins at home now? It’s a phenomenal record. I wouldn’t be disheartened if I was a Parramatta fan and they can’t stop the streak. They’re missing some key players, especially out wide.

Magic Munster is NRL’s No.1

If I wasn’t working, Munster would be a rare player I would pay to watch. He’s at a stage now where he’s gone past the superstar class. He’s elevated himself above anyone else in the competition.

I sat at home watching the game against Cronulla last month and he was getting me out of my chair. He scored a try that was Wally Lewis-like. Last week he blew the Knights away, and he was only in second or third gear.

His combination with Harry Grant is getting better and I’d like to say I’m excited to see them in Origin together, but as a New South Welshman I hope I don’t see it.

His form has gone to another level. We need players like him. We want our kids to be at games and say, ‘I was there the day Munster did this’. He’s brilliant to watch.

Stream the NRL Premiership 2022 live and free on 9Now.