Follow all the action from tonight’s Sydney-Essendon clash with our live blog from 7pm.

Geelong coach Chris Scott says he was only being honest when asked whether his brother Brad should return to AFL coaching, and his comment that “coaching is not a very good job” should not be seen as a complaint about his own circumstances. 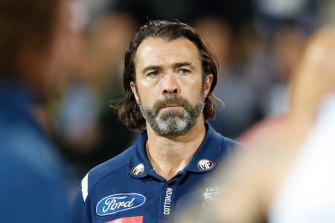 Geelong’s Chris Scott says coaches are under enormous pressure, exacerbated by cuts due to the COVID-19 crisis.Credit:Getty Images

He said he had empathy for coaches who took on jobs at clubs facing an even higher degree of difficulty in achieving success than existed at those clubs that were well resourced.

“If you want to achieve really, really great things in life, generally they come with some pain and the people who can endure that and come out the other side at least get themselves in the position where they can achieve great things,” Scott said.

“There are more comfortable existences and there might come a point in time where I choose one of those but it’s not now. I am at the stage now where I choose not to lie about this stuff.

“I’m prepared to endure some of the difficult times to get the chance to achieve something great.”

He also joked that there were easier ways to torture himself.

Meanwhile, Geelong recruit Shaun Higgins is likely to be out for at least a month after fracturing his thumb on Easter Monday with surgery required to fix the injury.

He hurt the thumb before suffering a hamstring injury which saw him sit on the bench for the second half against the Hawks.

The Cats were one man down having already lost Francis Evans early in the first quarter to an ankle injury that will keep him out for an extended period. The Cats are weighing up whether Evans, who made his debut in round two, will need surgery to repair the ankle.

Sam Menegola is likely to be available to play against Melbourne after suffering a shoulder injury in round one, however, Jeremy Cameron will remain on the sidelines as he recovers from a hamstring injury.

Brad Close and Josh Jenkins are in the mix for selection with Gary Rohan and Patrick Dangerfield both still having one match to serve of suspensions.

Scott said the club was holding back Cameron to ensure he had a good run when he returned, conscious of the experience of West Coast’s Luke Shuey who suffered a recurrence of his hamstring injury against Port Adelaide over Easter.

“It’s uncertain, at least in my mind, when we are going to unshackle him. We are just going to be so careful with that … you can get some bad luck and you have to do everything you can to mitigate that bad luck,” Scott said.

“He has been unlucky. We’re quite happy to put our hand up when it comes to situations that we could have handled better. He had a desperately unlucky mechanism to give that hamstring a minor tweak again to the point where it is almost impossible for it to happen in a game.”