AFL great Leigh Matthews has declared the player winning the ball must be rewarded and given sufficient time to release it amid debate over whether prior opportunity should be scrapped.

Senior coaches Brett Ratten, Damien Hardwick and Chris Fagan were among those who this year claimed that prior opportunity was causing too much confusion and suggested it should be axed.

The holding the ball interpretation remains one of the sport’s more debatable aspects, and is expected to be a point of conversation when the league’s 21-person competition committee meets next month. 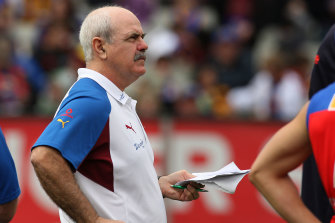 Matthews, a four-time premiership coach and arguably considered the greatest player of all time, expressed sympathy through the season for umpires in dealing with a rule which can send supporters wild. He said on Saturday the player winning the ball needed time to kick, handball or tap.

“People have different philosophies. Some people, for instance, think there should not be prior opportunity at all, which I am completely against,” Matthews said.

“It means if you get the ball, and get tackled … I just think you have got to give favours to the bloke with the ball. That’s my basic philosophy.

“My philosophy is to protect the bloke who has got the ball in his hands, given that he has got it.

Just how much time the player with the ball should have, and whether the player should be allowed, for instance, to be spun around once before releasing the ball, is a complicated issue, said Matthews. And just what constitutes “immediately” when it comes to releasing the ball by foot or hand is something the competition committee is likely to discuss.

“The umpire has to make that split-second decision – well, did he have prior opportunity? Therefore, if he didn’t get rid of it, it’s holding the ball,” Matthews said.

What should please supporters is that teams this year averaged 57.4 tackles per game – the lowest average since 2008 (53.6). There were outliers – the Giants and Suns combined for 176 in round 17 – but the new standing-the-mark rule may have contributed to less congestion, and tackling.

However, Hardwick, the three-time Richmond premiership coach, was particularly forthright in May, when he called for prior opportunity to be abolished, coming after St Kilda coach Ratten lamented his side earning just three free kicks from 86 tackles against Geelong

Matthews said there was “strong merit” in commentary colleague Gerard Healy’s suggestion that a player receiving a handball has had prior opportunity if tackled immediately but admitted a ruling of this kind could make life even more difficult for umpires.

At a time of the year when season reviews are completed, Matthews said the standard of umpiring this year had been strong.

“I thought the general philosophy of it all, protecting the ball carrier, only paying the obvious holding the balls because I watch that, I like that,” he said.

“I thought the umpires largely did that this year. If you ask me, I thought the way it was handled this year was quite good. But it depends on your philosophy.

“That simple question, should there be prior opportunity? I say yes, but some people say no. Clearly, they have a very different attitude to that concept than I have.”

The competition committee does not have the power to enforce change, rather the AFL says it guides the commission and executive on key aspects of the future direction of the sport.

The decline of the tackle