It might come as a shock that only one chapter of the 23 in Eddie Betts’ autobiography is devoted to that infamous camp. What emerges from a full reading of The Boy From Boomerang Crescent is much more than Betts as whistleblower. It is Betts as heir and successor to Michael Long, Nicky Winmar and Adam Goodes as the most important Indigenous voice in footy today. 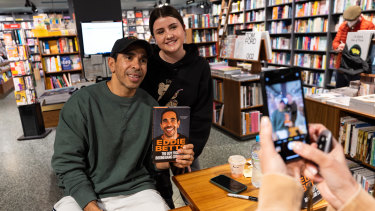 Like them, he was thrust into the role. Like them, he has found it wearying at times. Perhaps more than them, he accepts it. He acknowledges that he cannot bring book learning to the mission to root racism out of footy and society generally. What he can offer is his lived experience and a platform from which to elucidate it. That he does.

“I have always said to people that kids are never too young to start learning about racism,” he writes. “Being Black, I have no choice but to be political in order to survive in Australia … I had no choice about it from a very young age.”

In Betts’s book, there are two voices, one growing with and gathering authority out of the other. The first is the football naif. We meet him on page one, playing pretend footy matches with his two teddy bears in the back of his mother’s two-door Magna on two-day shuttles across the Nullabor between the homes of his parents’ people in Port Lincoln and Kalgoorlie.

That ever wondrous Eddie never fades. Here he is on his first AFL goal: “I couldn’t believe I’d kicked it – but I also always knew I would kick it, too, if that makes sense.” It did, hundreds of times. The Eddie you meet in the book is the Eddie you saw on the field. When he returns to Carlton in 2020, he finds his name still scratched into a desktop in the auditorium.

Family, nuclear and extended, journey with him through the book, and so does culture and community, “mob” to him. They’re there on every page, his collective raison d’etre. 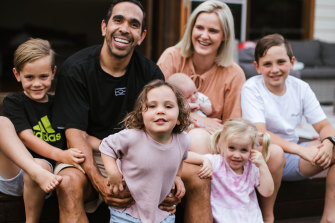 Betts tells of his distress to be separated from Anna and their children even for a couple of weeks during lockdowns, but also of how he and Anna had to infiltrate vegetables into the diet of teammate Charlie Cameron, one of several they took under the wing of their house in Adelaide. That house was always open.

For the 2017 grand final, the Adelaide players stayed in a different hotel to their families. Betts was agitated. “The club wanted to keep partners separate to give the players their space,” he writes. “But my family is my space.” 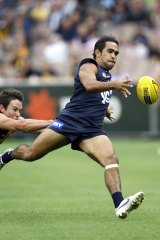 Eddie Betts in his first stint at Carlton. Credit:Vince Caligiuri

One of Betts’ grandfathers was painted darker than he actually was in childhood to disguise him from welfare officers who were collecting “half-caste” kids to send to a Methodist mission outside Perth. The other died in a police cell at 49. Their lived experience flows into his.

He does not hide, nor hide from, the blights of alcohol and family violence in his storyline, saying what his generation took from it was that they had to look after one another. He writes ruefully about his patchy education, which meant that the squiggles on Denis Pagan’s whiteboard in the team meeting before his first game meant nothing to him.

“They didn’t know that I couldn’t read,” he writes. “No-one at the club would know until my second year.” Later in life, he takes himself back to TAFE to do an educational support course. Education, he has decided, is the answer. But he sets what he missed in his upbringing against what he cherished, freedom and blitheness.

Out of all this synthesises Betts’ second voice, the activist’s. Betts wishes it had emerged sooner. Four days before Sir Doug Nicholls round in 2016, he received a handwritten letter with the heading ABO FAGGOT. He wanted to show it at a pre-booked media conference, but was talked down by the club.

“These days, I would do it without telling them,” he writes. “Upon reflection, they were trying to minimise any type of media circus before my game – but maybe this was more important than the game itself?” He did the presser with the letter burning in his pocket (and in the game kicked what he regards as the best of his many miraculous goals).

When a banana is thrown over the fence at him during one Showdown, he writes: “I knew what my next week would look like, and that was what drained me in that moment.” But he is gratified that all at both clubs stood with him. “I felt suddenly that I wasn’t bearing the burden of it alone this time,” he writes. 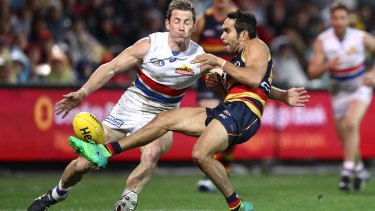 He is especially moved when Patrick Dangerfield comes to him after the 2017 preliminary final and despite being on the wrong end of the Crows’ jeers and a 12-goal beating says: “No matter what, we’ve got your back.” 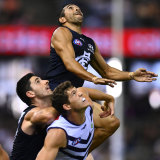 Eddie Betts in his last season: one for the road.Credit:Getty Images

In the context of the whole book, that camp becomes more misguided and nonsensical than ever. Betts has to leave Anna pregnant with twins and miss his son’s first week at school. “I am 30-something years old and I didn’t sign up to be in the army,” he writes.

“To me, leadership needs to come from within the club, not external forces. It doesn’t always have to look a certain way, but I believe leadership is fundamentally based on relationships and community, and good teams should allow everyone to have some type of role in being a leader.” In other words, they didn’t need to be told by strangers.

Betts uses the vernacular liberally but inoffensively throughout the book. In this chapter, it is understandably even more plentiful. As all know, as friction grew within the Crows after the camp, he was removed from the leadership. “I was so f—ing tired,” he writes. “I was also angry. It takes a lot of work for us Blackfullas to prove to other people that we’re capable of leading.”