Essendon are weighing up whether to include important pair Anthony McDonald-Tipungwuti and Kyle Langford in their side for Sunday’s elimination final against the Western Bulldogs.

The Bombers will be seeking to end a 17-year finals win drought in Launceston.

Small forward McDonald-Tipungwuti missed the Bombers’ last two home and away matches as he deals with fitness and personal issues but got through a reserves scratch match on the weekend, leaving the door ajar for him to take on the Dogs. 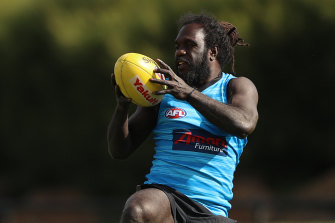 Essendon coach Ben Rutten said the Dons had yet to decide whether McDonald-Tipungwuti would play in the final.

“It’s probably a little bit early in the week. We haven’t finalised our selection yet. ‘Walla’ had a bit of a run around in our VFL game on Sunday and got through that fine, and that was good. He was really pleased,” Rutten said on Wednesday.

“We probably only anticipated him playing about a half initially but at half-time he was feeling good and enjoying it and wanted to keep going, so we decided to do that and I think that was really positive. We’ve got a couple more training sessions to go this week and we’ll just keep working our way through that with Walla.”

But Rutten was mindful of not making a rash decision about whether the goalsneak would play.

“It’s about continually monitoring him and making sure that we’re supporting him best we can and not just rushing him back in because it’s a final all of a sudden,” Rutten said.

“We’re still making sure that he’s our priority and we’re supporting him best we can, while making sure we’re doing the best thing for the team in terms of our selection as well. So a couple of things at play.”

Rutten said the fact Langford had injured the same hamstring twice in the season would come into consideration.

“Having a reoccurrence there we’ve been a little bit more conservative. But also the context of the season does start to become part of the decision-making as well.”

Rutten identified Brayden Ham, Marty Gleeson, Cale Hooker and Jye Caldwell as others also staking a claim for a recall.

With Victoria’s COVID-19 situation condemning the state to finals-free weekends, Rutten said the Bombers were bracing for an extended stint on the road.

He said he was expecting the Bombers would head to Tasmania on Saturday, taking their entire squad, in the anticipation they wouldn’t return to Melbourne until their final campaign is over.