North Melbourne have dealt West Coast’s finals hopes a blow, upsetting the Eagles at a wet Optus Stadium by 10 points on Monday night.

North led the Eagles by 12 points early in the final term, but quickly found themselves behind by 11 points and seemingly done in the game. Then David Noble’s men rallied again to put West Coast out of the match. 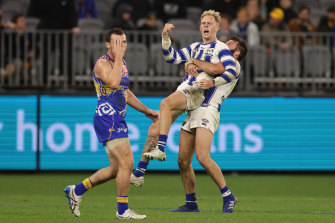 Jaidyn Stephenson was one of the best for North Melbourne in their upset win over West Coast.Credit:Getty Images

Jaidyn Stephenson starred for the Kangaroos, as did fellow youngsters Cam Zurhaar and Nick Larkey while the usual suspects like Ben Cunnington, Jack Ziebell and Todd Goldstein provided ballast throughout the ground.

Nic Naitanui threatened to will the Eagles over the line himself with a series of crucial contributions early in the final term to flip their deficit to a lead, but he was let down by most of his other teammates.

“It’s a massive tick to the players for what we are trying to build together, and our members are involved in that.” Noble said. “It is a significant night for our club.

“I think they [players] showed some real poise, some real character around not letting it go. If they were gonna beat us they were going to have to earn it.

“The dare is there, but I think what we have built … is some really good systems that that dare is not a risk. It is the way we want to play.”

West Coast could have gone to seventh spot on the ladder if they beat the bottom side North, but instead they are now eighth, but equal on points with St Kilda and only slightly ahead of GWS, Essendon and Richmond.

North combined strong contest work with more of a willingness to attack the corridor and it paid off on this occasion, the victory clearly the best of Noble’s short reign. 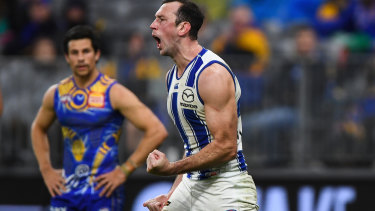 WASTEFUL EAGLES
West Coast comfortably had the better of the running and territory in the first half, but they couldn’t make their ascendancy count on the scoreboard. They dominated the inside 50 count 34-12 at half-time.

What restricted their ability to pull ahead was North’s effort and strength around the ball, generally sloppy Eagles play and inaccurate goal-kicking. The last factor is unusual from West Coast, and follows rare inaccuracy last week against Sydney (although they were battered and kicking straight would not have helped).

The moment that led to North being only two points behind late in the term was a bad kick from Josh Rotham. That turned the ball over and Nick Larkey marked inside 50 and converted the set shot.

Later in the term Tom Cole missed an open Dom Sheed kicking inside 50; more evidence of the Eagles uncharacteristic woes given their kicking has been precise for so long. Luckily, Oscar Allen converted a set shot from the boundary after the half-time siren to stretch the lead to eight points.

Final term goals to Zurhaar, Cunnington, Stephenson and Goldstein got North the win, with the Eagles defence unable to curb the Kangaroos when they attacked late. 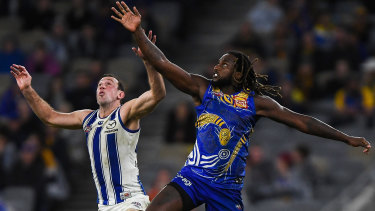 Nic Natanui was one of West Coast’s best again but could not get his team over the line.Credit:Getty Images

“Disappointing to lose. I thought we had good supply … We knew North what North was we’re going to bring,” Eagles coach Adam Simpson said.

“We’re low on confidence. The effort was better this week. We have got to make the most of our opportunities. North played a really good brand tonight.

“We’ve got to work through it. It’s football, and that happens you get down on form.”

The 33-year-old, 267-game veteran shot to the top of the list, needing only seven hit outs at Optus Stadium to pass Fremantle great Adam Sandilands, who had held the record on 8502.

Goldstein brought the milestone up with four minutes to go in the first term with a tap behind his head at a forward 50 ball up.

Sandilands is now in second with Sam Jacobs of Carlton, Adelaide and GWS third (6789), Dean Cox of West Coast fourth (6628) and Gary Dempsey (Western Bulldogs and North Melbourne) in fifth (6479).