Melbourne showed they are fast finding form while Collingwood may have lost duel sports star Ash Brazill to serious injury.

The Demons scored an impressive 20-point AFLW win over the Magpies at Marvel Stadium on Friday night with 21,528 supporters watching on with many taking the chance to take in some women's footy before the AFL state of origin game.

Brazill plays for Collingwood and the Australian Diamonds in netball while she's also become a key player for the Magpies in AFLW where she's a running key defender and one of their most consistent performers. 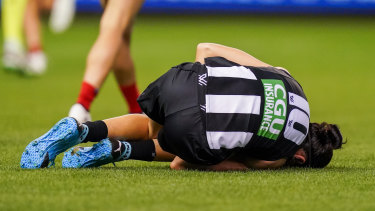 Down and out: Collingwood’s Ashleigh Brazill.Credit:AAP

She was planning to play in Friday night's game then travel to Sydney to play for the Diamonds in their bushfire charity match against an All-Stars side on Sunday in what will be long-time Australian coach Lisa Alexander's last game in charge.

But late in the third quarter of Friday night's AFLW clash with Melbourne, Brazill planted her left leg and went down in a heap before being taken from the field.

Brazill needed several minutes of treatment and was using the pain whistle as she was taken off the field on a cart although she also waved to supporters as she went along the boundary line.

Brazill's immediate sporting future looks under a cloud with scans needed to determine the extend of her injury. Brazill wasn't the only Magpie to go down as Ruby Schleicher left the field with an arm injury which left her in a sling.

While Brazill's injury was the lowlight, the Demons' hard-running and decisive play in the forward line was outstanding, especially with Melbourne needing every win and percentage point they can muster after their shock loss to St Kilda last round.

They began this round out of the top three in conference B but showed on Friday night they could still be a contender this season with Karen Paxman (24 possessions) in commanding form and a host of ball-winners on top of their match-ups.

Tegan Cunningham proved a strong target up forward kicking a goal and playing a role in several others while Kate Hore, first-gamer Jaqueline Parry, Shelley Scott and Eden Zanker all had eye-catching moments.

The Magpies had plenty of production from Brianna Davey (23 disposals), Jaimee Lambert (22 disposals) and Brittany Bonnici (15 possessions) while Sharni Layton was again strong in the ruck and kicked a goal.

But the Magpies didn't have the polish or the run and disposal of the Demons and that proved the difference in the big moments.