Queensland’s women’s State of Origin players will be paid the same amount as the state’s men under a landmark pay deal.

Players who feature in the women’s Origin clash in 2022 will be paid $15,000 – bridging the gender pay gap and bringing players such as Ali Brigginshaw and Tamika Upton in line with NRL stars Daly Cherry-Evans, Cameron Munster and Kalyn Ponga.

“You’ve got a job to do with the Maroons and you go and do it, knowing that you’re fully supported by the QRL, and I think it’s a big step from the QRL to make sure we’re aligned with the men’s team for the first time.”

An initial squad of 30 players will be chosen in March next year and paid $4000 to be contracted to the QRL for a series of camps before the interstate clash with NSW. The initial payment will be compensation for time off work to train and travel.

A further $7000 payment will be made to the 19 players who will be part of the squad before the Origin clash, with the 18 selected players for the game to receive a final $4000 match payment. 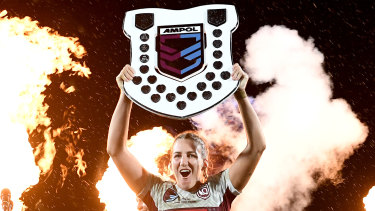 The men’s Origin players from both NSW and Queensland received $15,000 for each match they played in this year’s series.

“What this shows is that there’s a really strong progression coming in the women’s game, and it’s only natural that we keep giving our female players the opportunity to spend more time away to grow the game they love,” Cherry-Evans said.

The Maroons have won the last two women’s Origin matches against NSW, including a controversial 8-6 win on the Sunshine Coast this year.

The women’s State of Origin match will be played on June 24 next year, between two NRLW competitions after the 2021 six-team season was postponed.