Sydney could be without three top-line forwards for round one after Will Hayward was reported in their practice match against North Melbourne, while Ben Brown is doubtful he will be ready to play the Kangaroos' first game of the season.

Brown (calf) was unsure if he would be ready for round one when speaking at half-time of the Roos' clash with Sydney in Tasmania on Monday. 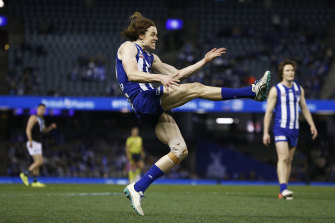 "I am actually getting an MRI tomorrow to see how everything is ticking along," Brown told Fox Footy. "Hoping that's all positive and we are aiming for round one … [but] the reality is it could be round two or three.

"With this kind of calf injury if you push it too quickly it could turn into a long-term injury."

With Lance Franklin (knee) and Sam Reid (calf) still battling injury to be ready for round one, Hayward was reported for a head high bump on North's Curtis Taylor in the first quarter.

Taylor continued to play but looked sore following the bump, where he was bent over to collect the footy only to be cannoned into by Hayward.

The umpire paid a free kick to Taylor and reported Hayward. The 21-year-old had an interrupted 2019 courtesy of a jaw injury after he kicked 22 and 28 goals in 2017 and 2018 respectively.