The Brumbies solidified their position as Australian conference frontrunners with a 47-14 bonus-point win over the Sunwolves in Wollongong.

The seven-tries-to-two rout was the Brumbies' sixth victory from as many starts against the Japanese side, and a little better than their average winning margin of 27 points in the sides' recent encounters. 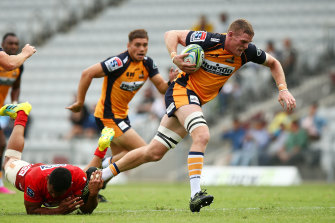 Tom Cusack makes a line break during the victory at WIN Stadium.Credit:AAP

There was no rust from the Brumbies after a bye week as they chalked up a fourth win from five starts before next weekend's derby against the Waratahs in Canberra.

Friday's fixture was initially scheduled in Osaka but SANZAAR moved the match to WIN Stadium due to the coronavirus outbreak in Japan.

New Brumbies halfback Ryan Lonergan dived over in the 10th minute and former Waratah Will Miller ran a superb line from an inside ball to score next to the sticks and make it 14-0.

A well set-up driving maul was finished off by Sunwolves hooker Efitusi Maafu but the visitors’ handling errors limited their ability to regularly threaten an in-sync Brumbies defensive line. 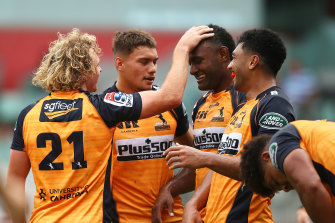 Joe Powell is congratulated by teammates after a try against the Sunwolves.Credit:AAP

When Rob Valetini and Toni Pulu streaked away down the Brumbies left edge for tries either side of half-time, the result was inevitable.

Tom Banks was superb and evasive at the back, while young No.10 Noah Lolesio once again showed an excellent temperament to put his name up in lights as a potential five-eighth for Australia later in the year.

Four second-half tries saw the Brumbies cruise to victory, with their big names all getting a decent hit-out.

There were a few familiar faces on and off the field that may have caused a few double takes.

At No.12 for the Sunwolves was Ben Te’o, the former Wests Tigers, Brisbane Broncos and South Sydney NRL star whose Test rugby career with England came to a screeching halt after a training altercation with teammate Mike Brown.

Te’o said he always planned to leave the England set-up after the World Cup and harboured no ill feelings towards Eddie Jones, who didn’t pick him for Japan.

Te’o is now experiencing plenty of Japanese culture with the Sunwolves, a far cry from his league days when he ran out on the same Wollongong field.

Te’o coughed the ball up a few times – one of which resulted in a try – and did not have a big impact on the contest.

Elsewhere, Nathan Grey was up in the stands. The former Waratahs and Wallabies defence coach, who was not re-signed after the World Cup, is working as the Sunwolves' technical director before they get turfed from Super Rugby at the end of the season.

The Sunwolves' Alex Horan, the son of Wallabies great Tim, did not make an appearance. It would have been a treat to listen to Tim, a commentator for Fox Sports, call the game with his young lad in action but he wasn't on the team sheet.