Panthers winger Stephen Crichton has refused to take credit for his match-winning intercept try, insisting he was simply ″⁣in the right place at the right time″⁣ in Sunday night’s premiership decider.

With 16 minutes remaining and scores tied at 8-all, Crichton plucked a cut-out pass from Cody Walker to winger Alex Johnston out of the air near the halfway line, before pinning back his ears and bolting to the try-line to push the match in the Panthers’ favour.

It was a nightmare error from Walker, who took exception to a remark from Nathan Cleary immediately afterwards and became involved in a scuffle with the Panthers halfback. The pair appeared to have buried the hatchet at fulltime, embracing in a show of mutual respect.

While his teammates were adamant the play was the defining moment for the Panthers, Crichton refused to take any of the accolades.

“It makes me happy, the credit from the boys,” he said. “The boys were saying [the play won the match], but I think a lot of it was because our forwards did their job of just picking them up and mauling them back. With everything that happened, I was just at the right place at the right time.“

Panthers coach Ivan Cleary said the play was a result of hours of practice at training. 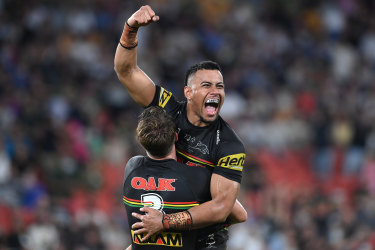 While his teammates believe he won Penrith the game, Stephen Crichton has refused to take the credit. Credit:Getty Images

“Our edge guys have practiced that situation, I don’t know how many times. Every single week,” Cleary said. “Credit to Cameron Ciraldo, who runs our defence; Andrew Webster, who runs our attack.

“We train for it, and when it comes off in the big moments [Crichton] has that ability to be able to do that. But he’s trained for that, too. It’s a beautiful moment when that happens. That was surreal. That was just gold.”

Crichton was up at 11am on Monday fronting cameras after pulling the pin on the night’s celebrations at around 5am. He said many of his teammates had still not been to sleep, with the group having left Suncorp Stadium at midnight before travelling back to the team hotel on the Sunshine Coast.

A group of bleary-eyed players continued on until sunrise and took the premiership trophy to the beach to round out the evening’s festivities.

Crichton said Nathan Cleary and James Fisher-Harris had led the team’s celebrations, having been the most devastated after last year’s grand final loss to the Storm.

“We were all burning last year, but they were burning the most,” Crichton said.