Collingwood have appointed Luke Ball to the sub-committee to select their next senior coach. 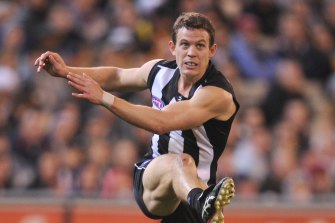 Ball’s appointment finalises the sub-committee for the Pies, who are on the hunt for a new coach after parting ways with Nathan Buckley earlier this month.

Robert Harvey is acting as interim coach for the remainder of the season.

“Luke is an outstanding football person, someone all in the game respect for his great character and acumen. His perspectives and abilities will be a certain asset as we embark on the process of seeking our next senior AFL coach,” Anderson said.

He served as president of the AFL Players Association for three years, spent two years working inside the AFL football operations department and a further three years with Essendon as manager of people and performance.

Collingwood have been dealing with off-field drama this season, with members collecting signatures to force a spill of the current board, and Jeff Browne announcing his intention to challenge for the presidency.