A few years ago Steele Sidebottom did something that had nothing to do with football, and everything. He bought his mum a house.

“It’s something I had always wanted to do,” he said. 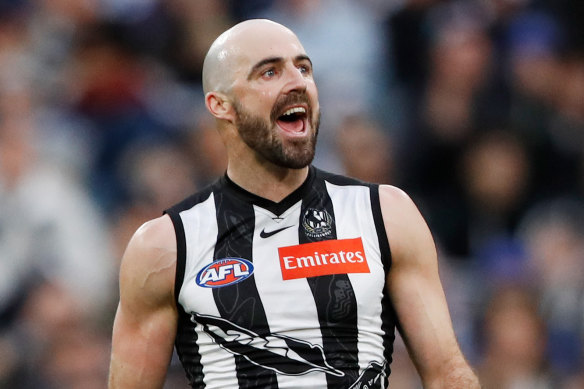 Steele Sidebottom of the Magpies.Credit:AFL Photos

“Our family has never had a lot of money, but I have never missed out either, there’s never been something I needed and haven’t got but Mum [Linda] lived in Shepp, rented off her sister and I just thought why not? It’s not really costing me anything, really, and she can do whatever she wants, it’s hers, she doesn’t have to worry about paying someone else rent or doing something to the house.

“I’m glad I’ve done it. It’s probably the best thing I have ever done.”

They found a house on the same street as one of his brothers in Shepparton. She lives four doors up and has her grandchildren running up the street for visits.

Steele has four brothers: Trent, Tyson, Josh and Ryan. Or as they are more commonly known as “Boof”, “Fleabag”, “Twiggy” and “Golly”. “Golly” (Ryan) is a county cricketer in England, playing for Warwickshire. At home Steele gets “Rusty”, but surprisingly enough, he more commonly just gets “Steelo” at the club.

He always figured he would return to Shepparton one day, but doubts that now. His fiancée Alisha Edwards is from Shepp too, but is a lawyer with a good job as a senior associate at a family law firm. They are settled, have a daughter Matilda and after getting married in October, are thinking of more.

He recently bought a house on a farm halfway to Shepparton. He figures it’s the best of both worlds. There are 30 houses on one-acre blocks on the 500-acre farm. They all pay a farm manager to do the actual farming but get to rumble around a property that stocks deer, camels, pigs, ducks, sheep and cows. It also has a pool, tennis court and a lodge.

He goes there often. Teammates who have visited say he does nothing but sit in front of his open fire. He laughs, but doesn’t dispute that.

“I have no idea about farming, but I love being in the country,” he said. 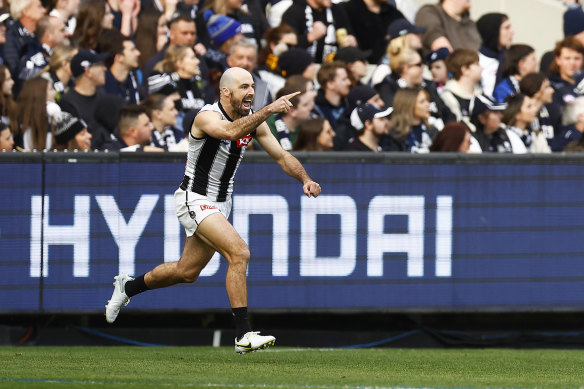 Farming is unlikely to be what comes next in his career, but he has time to wonder what comes next. The 31-year old is contracted for two more years after this at Collingwood.

That length of contract looked optimistic and worrying given his form over the past two years.

Last year, Sidebottom was shocked on Copeland Trophy night to finish fifth. He was not the only one surprised.

“Got lucky. Yeah, it took me by surprise,” he said this week. He admits his past two years were a long way from his best. He’d had a very ordinary year in 2021 and was coming off a difficult year in 2020 when he was suspended for a COVID-19 breach and missed the late rounds in the COVID hub when Alisha was due to give birth to Matilda.

He didn’t question whether he still had it as a player, but others wondered.

Last year, plainly the coaches valued his games more than spectators and analysts. The coaches knew the roles they had asked him to play and the sacrifices of his own game that were asked of him. With injuries to others, he was asked to played inside mid, high forward, wing – all over the place filling holes. He is not an inside player, but often had to play there.

“I never doubted that I had the ability. I don’t know what it was, to be honest. I think now I have got a bit more clarity on where I sit and maybe the last couple of years I was thrown around in positions a little bit. It’s not an excuse either,” he said.

This year it would be no surprise to find Sidebottom polling well in the best and fairest. An endurance beast with wonderful skills on either side of his body, the change in the Collingwood game has also suited his role as a wingman running end to end. He has returned to the sort of form that has helped him win two Copeland Trophies and regularly finish in the top bracket.

“This year I have played every week on the wing and been able to knuckle down,” he said.

“It is not about trying to be ‘best on’ every week, but I would like to think I have still got as much impact on the game when I don’t have the footy as what I do. Playing wing has freed me up, given me a really clear focus.

“ ‘Fly’ [coach Craig McRae] said to me when he came in, basically ‘where do you want to play?’ And I said, ‘I think I have played my best footy on the wing.’ He was like, ‘All right, well, let’s train it all pre-season and play on the wing’ and that’s what we have done. I probably haven’t been ‘best on’ in any game this year, but I have played my role most weeks, so I am happy about that.”