For so many years, Melbourne’s football brand has been a certain flakiness, an inability to get the job done when it mattered. Now, they’re one win away from a grand final, after rolling over the Brisbane Lions in the first half, then gritting their teeth – and Rising Star winner Luke Jackson even lost one of his – to hold on, their defence supreme in a 33-point win.

The Demons looked the better side all night, winning almost all the key battles on the ground. Their midfield was especially dominant. Christian Petracca kicked the goal that sealed the win in the last quarter, and the look on his face the moment the sweetly kicked Sherrin left his boot said it all. And then he kicked another. 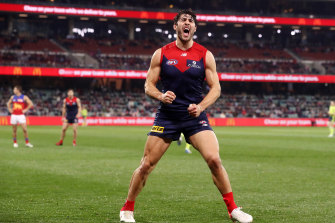 Christian Petracca roars his approval after booting a goal for the Demons.Credit:AFL Photos

But really, this was Clayton Oliver’s game. His physical power is equal to Petracca’s, but his ability to will himself on the contest breaks other teams. He did most of the damage early, with three assists and a goal in the first half. He typified the new steel in this Melbourne side, a relentlessness, perhaps even an edge of strictly controlled rage.

The Lions will now face the loser of Sunday’s match between the Western Bulldogs and Essendon. They have also lost Daniel McStay, a massively important player structurally, to concussion. An awful lot now rests on Joe Daniher’s shoulders, and while Daniher was wholehearted, he didn’t kick a goal for the first time this season.

Their best player was Charlie Cameron, who kicked three goals in the first quarter and finished with five, and Lachie Neale, who almost fought a lone hand in midfield. A few of his teammates couldn’t find the footy at all. Daniel Rich, as usual, had a stack of it from half-back. But even he was missing targets.

The first quarter was electric, punch and counter-punch, with the Demons narrowly taking the points. All nine goals were scrambled from ground level, Cameron pure electricity for the Lions, Zac Bailey – who looks born for finals – another, Neale back to his best with 11 early touches. 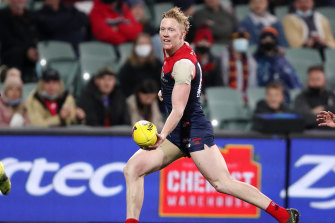 More surprisingly, Oscar McInerney was winning the early ruck exchanges with Max Gawn, and the Lions had a narrow advantage in clearances. But Melbourne – well-organised, driven by a maniacal belief – had the answers. Ben Brown was first on the board and was immediately walking taller. Oliver was imperious.

By the second quarter, Brisbane buckled. The Lions couldn’t get their hands on it often enough, or maintain possession of it long enough, under Melbourne’s heat. Gawn lifted, taking two powerful marks on the wing. Petracca began to steamroll through the packs. And Oliver went from imperious to unstoppable.

The Demons had a five-goal break at half-time, with the sort of mid-range score they’ve won games with this season. And then they tightened up: for a quarter, they hardly scored at all. A stalemate ensued. Cameron broke it, peeling away for his fourth goal. Hugh McCluggage, getting better as it went on, added another. The Lions had a sniff, just.

But the Demons held firm, Petracca’s two goals and a fourth to Bayley Fritsch making sure there’d be no miracles for the Lions this week. They were too hard, too well drilled, and too good. And they’re going to take a power of beating – quite possibly literally, with Port Adelaide in the other preliminary final.