Essendon are not looking further ahead than Sunday’s game against North Melbourne after being thrown into uncertainty when forced to leave Victoria at a moment’s notice on Thursday.

The club understands there is a chance they will be on the road for several weeks but remain hopeful they might be able to play upcoming home games against the Giants and Sydney in Melbourne. 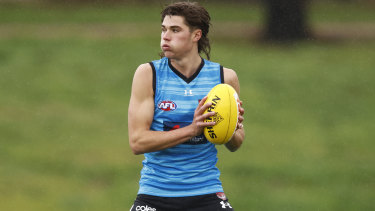 Sam Durham is preparing to make his senior debut for the Bombers this weekend.Credit:Getty Images

However, coach Ben Rutten says they will just take what comes their way without complaint with their immediate focus on beating North Melbourne at Metricon Stadium to stay in finals contention.

“Our focus is about preparing ourselves as best we can for the game for North on Sunday, then get through to Monday and hopefully we will have some more information then. That’s the environment at the moment. I don’t think there are answers out there so we will know we will be here on Monday and we have North on Sunday.” 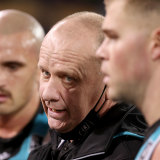 Two players – Paddy Ambrose, who is injured and has just had a baby, and Andrew Phillips, whose wife is 38 weeks pregnant – stayed home but the remainder of the squad travelled, indicating the club’s preparedness to be on the road for several weeks.

Essendon were not the only club dealing with uncertainty as St Kilda, Port Adelaide, Melbourne and Hawthorn remained unsure on Friday morning as to what time their games would be played on Saturday.

Port Adelaide coach Ken Hinkley said they would definitely fly in and out of Melbourne to play the Saints at Marvel Stadium and it was likely the match would be played in the early afternoon, rather than at night when it was originally scheduled.

The Saints were anticipating being in quarantine in Perth for a week ahead of their round 19 clash against the Eagles at Optus Stadium, with their coach Brett Ratten saying the plan was for them to fly out soon after they played Port Adelaide.

Hawthorn coach Alastair Clarkson joked that his team would be prepared to play on Friday night if called upon but he expected to play against the Demons at the MCG at some time on Saturday.

With Geelong returning to Victoria on Friday morning, and Richmond and the Western Bulldogs both expecting to fly straight back to Melbourne after their respective matches on the Gold Coast, it’s clear the AFL is trying to avoid keeping clubs on the road unless the location of their next match is relatively clear.

Brisbane Lions CEO Greg Swann told SEN he was uncertain when, or where, their scheduled clash against Hawthorn in round 19 would occur. Swann said, although it had not been discussed, he imagined there was some chance the AFL could pause the season for one week to take stock of the situation with five rounds and finals to be played after this round of matches.

The AFL has said they will not release the round 19 fixture until next week when the situation becomes clearer.