He was shown a red card for a dangerous shoulder-first tackle on Welsh winger George North, a decision that left England head coach Eddie Jones bewildered. “At the end, when you are playing with 13 against 16 its hard,” said Jones, the 16th man obviously a reference to Kiwi referee Ben O’Keefe.

“I usually don’t comment on decisions, but I find this bizarre and ridiculous. I don’t see how you can tackle a guy now. It’s absolute rubbish.

“There is no common sense shown. I don’t know what Manu is supposed to do in that situation.

“I don’t now how he is supposed to tackle the guy. How else do you tackle if you don’t tackle with your shoulder? The guy is literally half a metre off the ground.

“Manu does everything he is supposed to be doing. He gets red carded. Come on. You can’t tackle any more.”

England were 33-16 ahead when Tuilagi was shown his red card with Ellis Genge already in the sin bin. It allowed two late tries for Wales, but the victory was secure.

“It was a good, tough win, and I thought we were brilliant,” added Jones. 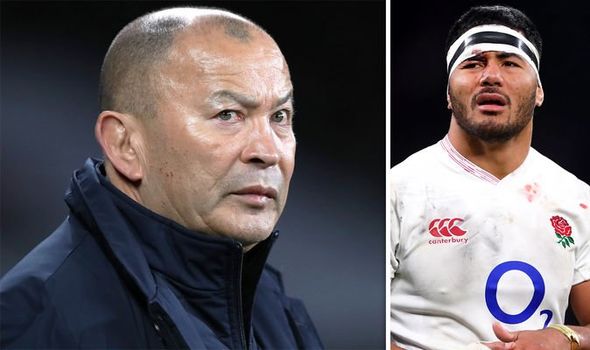 “We had people missing off the field and couldn’t seem to do anything right by the referee. It was difficult.

“Our resources were tested, but we came through. We are a better team now than we were at the World Cup. We can play in every way.”

England’s final match of the tournament, scheduled for next weekend against Italy, has been postponed due to the coronavirus. They now wait to see if table toppers France falter.

Captain Owen Farrell praised the composure and power of his team, saying: “I thought we stayed calm in key moments. Wales were always going to throw everything at us and have their moments, but it felt good, it felt calm. We have grown as a team.

“We enjoy defending, being physical. We put them under pressure and that’s a big part of the game at the minute.”

The new Wales coach Wayne Pivac rued too many errors from his team. He said: “We are our own worst enemies at the minute. We’re working hard to get it right over 80 minutes, and I think we’re heading in the right direction.”